Mega Don is not suitable for people who are afraid of sharks!
After all, they are huge animals with a terrifying mouth full of sharp teeth. However, the media industry also contributes to this fear to a large extent, since not that many people are killed by sharks each year. In fact, it is people who kill huge numbers of sharks each year.
This slot from Play’n Go, called Mega Don, is named after the Megalodon.

Play’n Go has chosen to take an angle from above with Mega Don. In the background of the design, you can see some ice floes floating, while the menacing shadows of hungry sharks swim around the playing field.

Mega Don’s design remains somewhat superficial. It’s not a bad design, but it lacks a “special touch” that would allow it to stand out from other slots with a similar theme.

We are more pleased with the soundtrack, which is quite dynamic. When nothing is happening, the soundtrack is quiet. Once things get exciting, it builds to a Jaws-like suspense.

Like the music, the variance of Mega Don is also high. There is an online casino payout percentage of 96.0%, which is around the general average.

The game takes place on a playing field with dimensions of 5×4 and has up to 1,024 different ways to win. You can win up to 10,000 times your stake in Mega Don.

Mega Don vs. 3 other slots with ocean thematics

The features of Mega Don are all about Symbol transformations. These transformations play an important role in both features. We’re talking about the Snack Time feature and the Shark Feast feature, which is actually just the free spins feature.

The Snack Time feature is a feature that can be activated at any time during the basic game. The feature actually works very simply. Up to 3 random low pay symbols are upgraded to a more valuable symbol. By the way, this involves all units of those maximum 3 symbol types.

If units of 1 of those maximum 3 symbol types land on the playing field, they are transformed into a valuable Shark symbol.

The free spins feature of Mega Don is also called the Shark Feast feature. To trigger it, you need to spin enough scatters in the base game:

These symbol upgrades work basically exactly the same as with the Snack Time feature in the base game. You can also earn extra free spins during the free spins feature:

So it is technically possible to have 6 low symbol types upgraded to a more valuable symbol type simultaneously during Mega Don’s free spins feature. 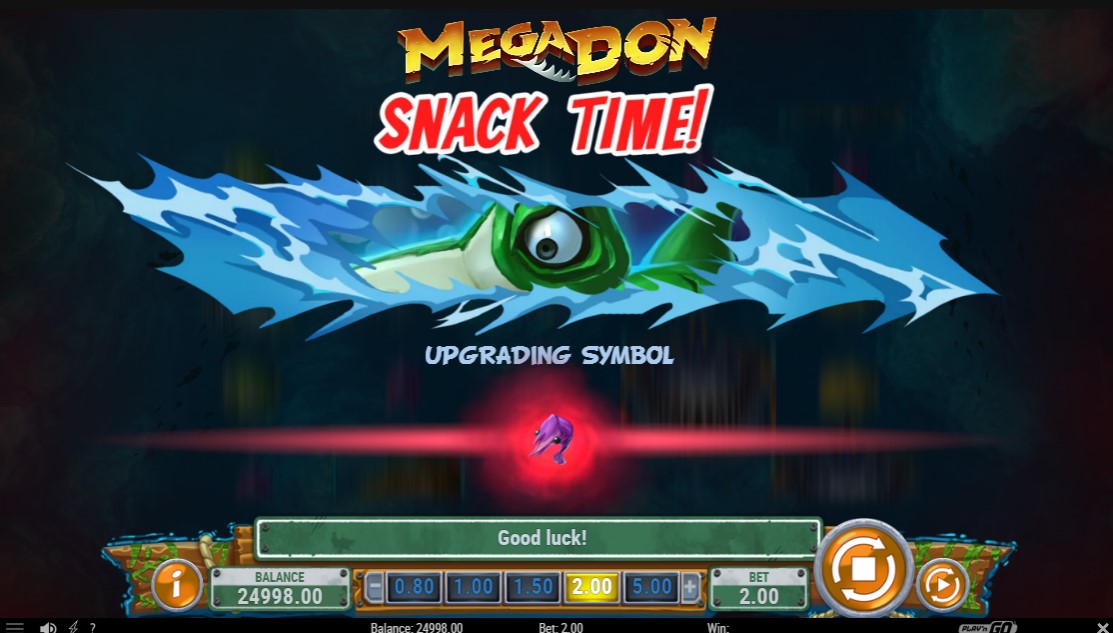 The Snack Time feature upgrades random symbols during the base game.

For people who like sharks and simple slots, Mega Don is definitely a must. And simple we definitely don’t mean in the negative sense of the word this time. Mega Don, in all its simplicity, is a slot machine that is well constructed.

The game plays fast and smoothly and you can win high prizes. With a soundtrack and sharks swimming around in the background, the tension builds considerably. Although we must say that it does not reach the level of Razor Shark from Push Gaming.

This fast-paced and exciting game is definitely worth a spin or two.

Mega Don is a perfect work done by the provider Play n Go.

Randomly triggered, the Snack Time feature can transform up to 3 low value symbols into high paying ones.

Yes, there is a free spins mode which also features the symbol transformation modificator.