Get your mindset ready to participate in this car race in the online slot game Mad Cars, a brand new slot game designed by software developer Push Gaming. Your mission will be to spin the wheel to create a crazy car race, and if you can win it, you will probably get a lot of money.

Mad Cars is a crazy racing themed online video slot with 5 reels and 6 rows of 5 symbols, with a payout mechanism that includes a total of 50 paylines, as well as a plethora of additional features from the Free Spins feature to kick off this crazy car race. In this contest, you will have the opportunity to win prizes worth up to 25,000 times the stake.

The design of this game is considered an exotic graphic design. The background image is a racetrack in a deserted city. The casting hoop has been built as a race track, waiting for the car race to start.

There are several possible payout percentages, the highest being 96.39%. The lowest is unfortunately a lot lower at only 88.49%, so it’s good to check with which RTP you’re going to play Mad Cars.

The features in Mad Cars are obviously all about cars, as we see in instant prize cars and the scatter car feature. But also the boost reel feature is full of car related stuff. Finally, there is the free spins round, where the Mad Race can really begin.

The Instant Prize Car symbols can land on the bottom row. They show a prize from 1x to 100x your bet, and pay out that prize once they reach the top of the playing field. If you have multiple instant prize car symbols on the bottom row, then only the car that lands first will pay out its prize.

Mad Cars vs. 3 other slots by Push Gaming

The scatter car symbols also land only on the bottom row, but have no cash prize with them. When a scatter car reaches the top row, you will access the free spins round.

Above the playing area of Mad Cars is another horizontal reel, called the boost reel. Four different boost symbols or blanks can appear on this reel. 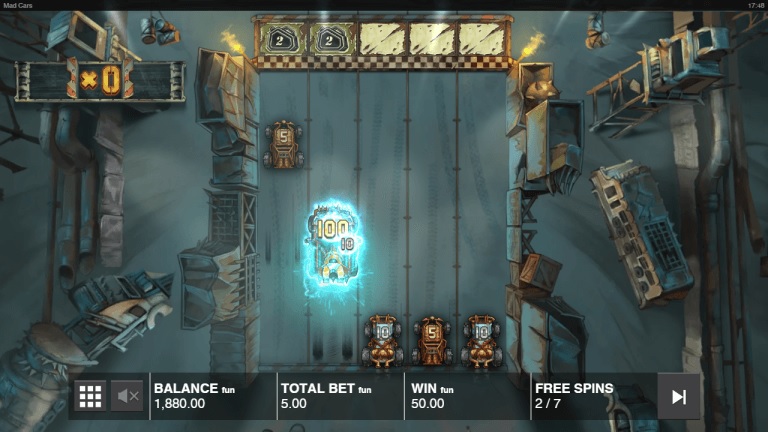 The boost reel feature remains active during the free spins round.

Mad Cars has an extensive free spins feature. As we mentioned earlier, you get access to this feature when a scatter car symbol reaches the top row. For this you get 7 free spins.

The boost reel feature remains active during the free spins round, but works slightly differently. For example, the survivor modification is no longer in play. But you do get 4 other symbols added.

After the last free spin, there is still a chance that the Mad Race feature activates. In that case, all Instant Prize Car symbols ride to the top row, so you get the prizes paid out.

Yes, you can. Mad Cars is playable on both mobile and desktop devices.

The cars can only show on the bottom row and will only pay the respective prize once they reach the top row.

Mystery Mission to the Moon