The Jelly Mania XtraStreak slot developed by Swintt is unique, with its candy and creature theme, the game is really unusual and works with the XtraStreak mechanism that allows it to trigger a mandatory win on each spin.

There are no reels in Jelly Mania XtraStreak, only a symbol on a line that will be used for each spin. The objective is to get a series of identical symbols over several spins to get better rewards. A single symbol earns a prize that can range from 0.12x to 3.2x the bet, but to win bigger prizes, you need to get a string of identical symbols. So, if you get the same symbol 5 times in a row, the prize will be 100x higher.

The RTP of the Jelly Mania XtraStreak slot machine is 95.44% but be sure to check this criterion because sometimes it can drop to 88.59% depending on the version you play. The stake of each spin can vary between $0,25 and $100.

A selection of small creatures and jelly beans complete the game’s symbols, the highest paying one can pay 320x the bet per spin, it is represented by the rainbow jelly. Then there is the crowned monster capable of paying 200x the maximum bet, then the cowboy capable of paying 120x the maximum bet. The pink candy, yellow propeller, green imp, cyclops and mushroom will pay up to 80x, 48x, 32x, 20x and 12x the maximum bet respectively when you manage to string together 5 successions of the same symbol. 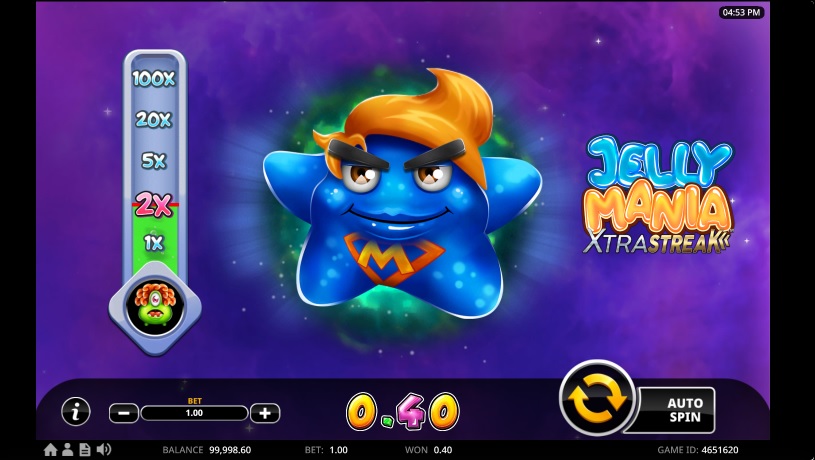 When the Wild appears, it will increase the X of the previous symbol.

Without a lack of features…

In addition to this, there are two special features in Jelly Mania XtraStreak, the Wild and the Re-Spins.

The star is the wild symbol that can substitute for all symbols except the bonus.

The Bonus symbol activates 3 Re-Spins to increase your winnings considerably. The biggest win that can be achieved is 960x the bet in one spin corresponding to the payout for a succession of 5 rainbow frost symbols on three re-spins.

Released in March 2022, this fun and new kind of slot will probably attract the curiosity of many players, getting a prize for each spin is a novelty but the XtraStreak mechanism gives a very different approach from what we know, a little disturbing at first, but you will love it later. It is best to try the free demo version to understand all the mechanisms of this game.

No, there are no such bonuses in this game, but there sure is a Wild symbol and some Re-spins.

Yes, click on the game page to try it out in a demo on your mobile or tablet.