Choose your side in Red Tiger’s Hustling slot released in December 2021 and enter this tense climate pitting East Coast rappers against West Coast rappers in the United States for a memorable hip-hop rap moment.

In the Hustling slot, the East Wild and West Wild are the highlights of the game, leading players to spectacular wins that pay both ways and unexpected free spins. The battle between Los Angeles and New York City artists really begins during the bonus round, this is the time to collect the rewards of the various Freestyles while avoiding a stray ball from the other side.

Big wins are in the house.

Red Tiger’s Hustling slot offers a 5×3 reel grid with 10 paylines whose scenery is divided in half for the West Coast on the left and the East Coast on the right.

On this creation inspired by a 90’s rap and hip-hop theme, Red Tiger offers a highly volatile gaming experience with an RTP of 95.69% and a maximum winning potential of 3151x the bet.

As mentioned above, there are only 10 paylines but the advantage is that they pay both ways, you can win by making identical symbol combinations from left to right or right to left. You need at least 3 symbols to win.

The highest paying symbol is the gold chain with the dollar sign, it pays up to 200x the bet for a combination of 5 identical symbols. The sneakers pay up to 60x, the stereo pays up to 50x, the spray paint cans pay up to 40x and the cap pays up to 30x. 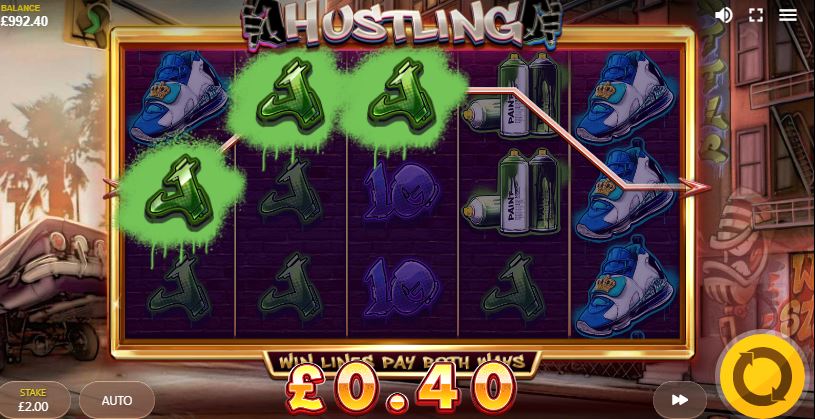 As per default, the Royals in most games deliver lower payouts for a winning combination.

Ten free spins are triggered when the two rappers appear about to engage in a fierce battle during the bonus round. Before starting, you will have to choose your side between the West Wild and the East Wild. Both of these multipliers will remain locked in with an initial x1 win multiplier that can increase. When a Super Wild is involved in a win, its multiplier increases. 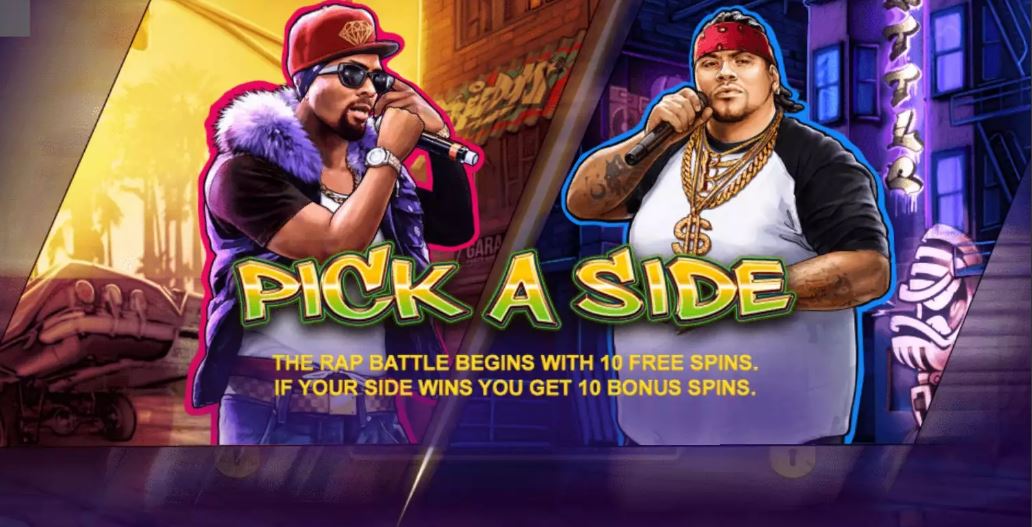 When the Free Spins are triggered, players are asked to choose between the East side and the West side.

Wilds apply their current multiplier to each winning line they participate in and if both Wilds participate, then the multipliers are multiplied between them.

The Hustling slot probably takes some of its inspiration from Nolimit City’s East Coast vs West Coast slot, but developer Red Tiger has managed to pull off the theme in a different way. We will admit the sobriety of this new casino game on rap compared to Nolimit City’s creation which was more elaborate aesthetically and technically speaking. Anyway, the conflict between the West Coast and the East Coast is well represented mainly during the Free Spins where the jokers are locked and are at the heart of the action to increase the winnings multipliers. With a maximum winning potential of 3151x the bet, this leaves you with every chance of winning big on this slot.

This game is accessible for free and without downloading in demo mode directly on your browser, for more comfort, activate the full screen mode.

Yes, go to the Music slots theme! Or check out the recommendations directly on the game page.