It probably won’t surprise you that NoLimit City is once again pushing the thematic boundaries. This time the theme is about Folsom Prison, the second oldest prison in California. San Quentin is the oldest prison and NoLimit has already released a slot about that in 2021 with San Quentin xWays.

This game uses the game mechanics xWays and xSplit which gives you an extra chance of winning combinations during the basic game. There are cockroaches that count as wild symbols and walk across the playing field to leave multipliers. Then there are two exciting bonus rounds where the size of the playing field is adjusted. Finally, players have the option to purchase the bonus game. You can take advantage of this during the demo game.

Folsom Prison vs. 3 other slots by NoLimit City

How the Folsom Prison Slot works

The playing card symbols provide a payout of 0.3x to 0.9x the bet when you spin five of the same kind. The five prisoners count as premiums and the top prize is won by the prisoner with a CASH (probably a Johnny Cash reference) tattoo on his forehead. With five of the same premiums you’ll pick up 1x to 2.5x the bet.

Regular wilds and cockroach wild symbols have been added to the game. Both can substitute for all paying symbols to form a winning combination.

During the base game or bonus game, you have to deal with xWays and xSplits symbols. An xWays symbol can turn into a regular paying symbol. In addition, this symbol is duplicated 2 to 4 times so the number of ways to win can increase considerably.

The xSplit symbol only appears on the two middle rows of reels two through five. The row they land on is split into two to create more winning ways with this too. This symbol then turns into two wilds. If you manage to split scatters, it earns you an extra spin during the bonus game.

Cockroaches land as a regular symbol after which they turn into a wild. They move around the playing field and can unlock positions locked with bars. Moreover, they come with a multiplier that they leave behind on all positions they walk over.

A nest of cockroaches is always placed on the middle three reels. During the bonus game, cockroach nests can be activated as soon as a cockroach walks over them. If that happens, the corresponding multiplier is increased up to 3 times. 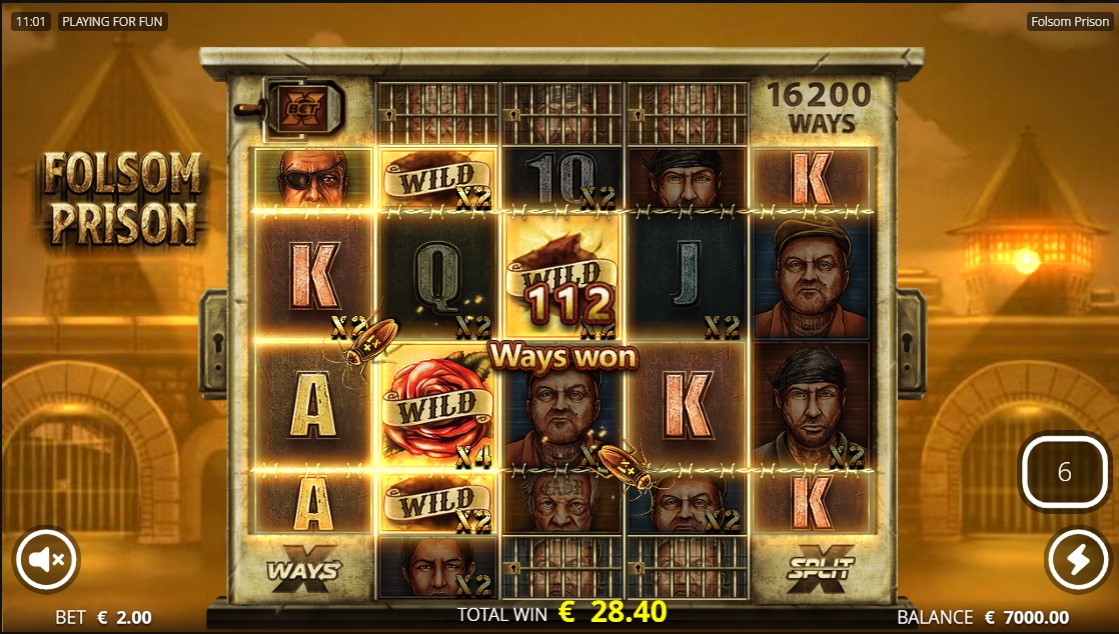 During The Chair bonus, cockroaches leave multipliers all around the grid.

If you manage to land three scatters during the base game of Folsom Prison the Walk The Line bonus becomes active. Scatters that are split by xSplits yield an additional spin. You now receive 8 free spins and the playing area is now expanded to 2-4-4-4-2. You are guaranteed one cockroach symbol with which the cockroach feature becomes active. Should you land a scatter during the bonus game you will receive additional spins and the bonus will be upgraded to The Chair.

For The Chair Bonus you need at least four scatters or you must have landed a scatter during Walk the Line. Here too split scatters generate extra spins. You now receive 8 free spins and the playing field now gets a 4-4-4-4-4 formation. Three cockroaches are now added as well.

What do we think of the Folsom Prison Slot?

Folsom Prison is another great slot release from NoLimit City. For excitement and thrills, you’re not completely dependent on the bonus game either. During the base game, all sorts of things happen, there are xWays, xSplits and cockroaches that can yield nice cash prizes.

The payout is screwed down if we compare it to the 150,000x bet of San Quentin or the 300,000x bet of Tombstone RIP. On the other hand, you can play this game with a maximum bet of $100 per spin. As far as we are concerned, this game therefore gets a score of five out of five stars.

When an xSplit symbol appears on the grid, it will split the symbol it landed on in order to create more winning ways.

Yes, you can. Check our list of the most reputable online casinos so that you can choose a reliable one.

Folsom Prison can feature up to 46,664 active paylines.

Folsom Prison features one of the biggest NoLimit City wins with up to 70,000x!