Divine Stars is a video slot from Lightning Box Studio that plays on 5 reels, 3 rows and features 25 paylines. In this oriental environment, the bets range from $0.25 to $50 while the impressive maximum payout culminates at 125,000 times your bet. The game has a payout ratio of 96.19%. In terms of features, Divine Stars offers Wild and Scatter symbols, Hold’n’Spin, Divine Pick Bonus and free spins.

At first glance, the Divine Stars video game has an Asian, and more specifically Chinese, feel. The large reels have a golden frame and take up a large part of the screen. They are arranged at the top of stairs that lead to a red house. The stairs are decorated with dragons and large red lamps are hanging on both sides of the scrolls. Rather soothing music consisting of flutes and stringed instruments accompanies the game.

To form a win, you must land at least 3 identical symbols on a payline from left to right, with the win starting on the first reel on the left. Divine Stars can be played on all types of devices such as smartphones, tablets and computers thanks to its HTLM5 technology.

The lowest paying symbols in this oriental tale are represented by the 10, J, Q, K and A card deck. If you land 5 of them the same, you get between 2 and 4 times your bet. The most lucrative symbols take the form of a miniature hot air balloon, two red envelopes, a sailboat, gold bowls and buttons, and a girl hugging a koi fish. This series of symbols allows you to get between 4 and 20 times your bet for a win containing 5 symbols. The wild is a Chinese man with a long beard and a golden crown on his head. It can substitute for all regular symbols except the Scatter.

2 or more Scatter symbols landing on adjacent reels from the left will activate the Hold’n’Spin feature. 5 Scatters will trigger the Divine Pick Bonus feature. The betting range in Divine Stars is $0.25 to $50 and you can win up to 125,000 times your initial bet. 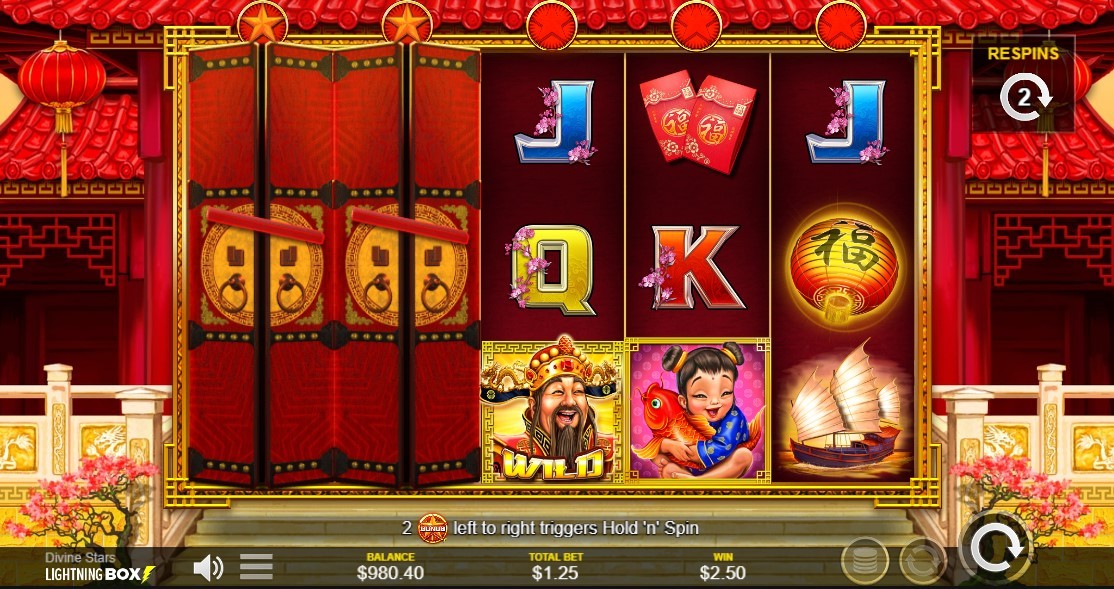 Divine Stars will make your life better with its max. win of 125,000x.

The main features of the Divine Stars game are the Wild and Scatters symbols, the Hold’n’Spin, the Divine Pick Bonus and the free spins.

The Wild symbol: it is represented by a smiling Chinese old man with a mustache and a long beard. It can substitute for any symbol and has the ability to land anywhere on reels 2, 3 and 4.

Scatter Symbol: The Scatter is a golden star with the word ‘Bonus’ on it. In most slots, you can land the Scatters in any position. But for Divine Stars, they must land on adjacent lines, starting with the first reel on the left. The feature will trigger, even if the symbols are not on a payline. Landing at least 2 Scatters will activate the Hold’n’Spin feature while 5 will trigger the Divine Pick Bonus. The Scatter symbol only appears in the base game.

Divine Stars vs. 3 other slots with Asian thematic

Hold’n’Spin: This feature works as long as you land 2, 3 or 4 Scatters on adjacent reels. The reels containing Scatters are locked in while the other reels will be subject to 3 respins. If a Scatter lands on a running reel, the spins are reset to 3. This continues until you run out of spins or until 5 Scatter symbols land. These will trigger the Divine Pick Bonus.

Free Spins: You’ll start this feature with the number of spins and multipliers assigned to you by the Divine Pick Bonus feature. All wins will be multiplied by their number. The feature ends once you have used up your spins and it is not possible to retrigger spins.

This Asian themed slot was designed and created by the provider Lightning Box.

Yes, the provider made sure that the slot is available both on desktop and mobile devices.