Contemplate the diamonds and gems delivered by GameArt’s Diamond Magic slot machine and soak up the luxurious atmosphere as you play this game released in February 2022.

Diamond Magic slot game takes us to a classic and neat world with a pinch of extravagance due to the various special features including Expanding Multiple Wilds and the resulting respin feature. The array of special gems should not be lost sight of, this is especially true for the Diamond which will play the role of a Wild capable of delivering great rewards when it appears.

With its sober interface on a red velvet background, Diamond Magic comes with 5×3 reels and 10 paylines that pay when 3, 4 or 5 identical symbols line up from left to right. Touted as a highly volatile slot, Diamond Magic will have an exceptionally high RTP of 96.88% during play and improved to 97.06% when the bonus buy-in feature is activated. 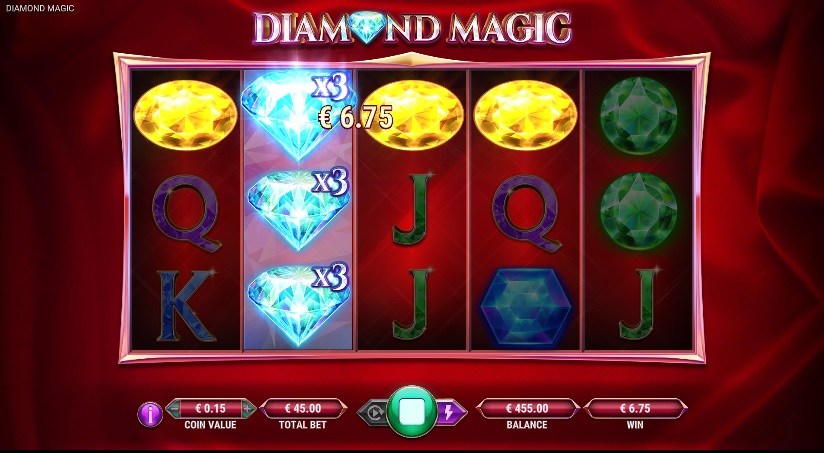 Whenever you land a Wild symbol, it expands and a re-spin is triggered.

A wager of between $0.10 and $100 is required to get started. The best winning combinations are achieved with the colored gems of which the red one pays up to 50x the bet for a combination of 5 symbols lined up while the blue, green and yellow gems will pay up to 10x, 5x and 2.5x the bet at the most. The A, K, Q, J symbols pay up to 2x and 1.5x the bet.

By far the most important symbol here is the Diamond, which acts as a Wild, substitutes for all symbols in the game without exception and has a win multiplier of up to x5.

When a Wild appears on the screen in Diamond Magic, it expands to cover the entire reel, and can appear on reels 2, 3 and 4.

Multipliers appearing on reels on the same payline are added together and when a Wild expands, a respin is won.

During respin, the reels containing Wilds stay put while the other reels continue to spin to give you more chances to hit big prizes.

A Gamble feature accompanies the Diamond Magic slot machine, you will have to guess the color of the card turned over to double your win. You can bet up to 5 times in a row.

Buy Feature is an option to see an Expanding Wild appear on the screen, which costs the player 30x the bet. This will cause an Expanding Wild to appear and therefore generate a Respin. Your RTP is boosted up to 97.06% during this moment.

A little light at first, it’s not until the Wilds appear that Diamond Magic reveals its full potential to players. Once that happens, the respin will provide extra excitement and multipliers can increase winnings up to 15 times. Try your luck at winning with this diamond themed casino game!

In Diamond Magic there are Expanding wilds with multipliers and Re-spins and a Gamble feature.

The Diamond Magic slot is designed and launched by GameArt.

Yes, GameArt programmed the slot so that it is playable on all sorts of devices.

The slot doesn’t really have a theme because the design is of a classic slot.