Boilin’ Pots is a truly high variance video slot produced by Yggdrasil Gaming, which was released on online and mobile casinos in May 2022. It was clear from what we just said that there is a bonus game, among other things. We will write more about this and other features in the following chapters.

The theme is illustrated with a witch’s magic potion that is somehow more appropriate for autumn. The winning and special patterns are embedded in this same pot, with the mystical forest in the background changing color as you move from the base game to the bonus game.

Details of the Boilin’ Pots game

Symbols in the Paytable

The paytable includes low to high value green plants, blue hands, eyes, red wings, purple bottles, green, blue, yellow and red gems, and purple books as the main winning pattern, with a line value of 10x the bet on five reels. Among the special patterns, flies are wilds and bonus symbols are scatters.

We also count the green arrows pointing upwards as special symbols. When such an arrow appears on the reels, it increases the number of lines by one up to the seventh line. The line count will be restored before a new spin.

The four arrows are followed by a feature called Wild Respins. Reels now have wilds in stacks of three rows. Wild Respins ends in a non-winning round. 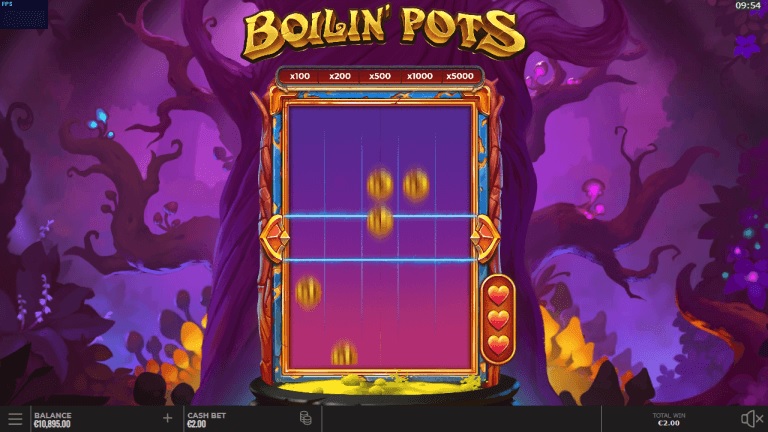 The bonus round comes with a 5x win guarantee.

Three, four or five scatter symbols advance to the bonus game. If there are four or five scatter symbols, the player is awarded x10 and x100 coin wins. The idea of a bonus game is familiar to many of us. There are three Respin paylines, with the middle line being the one you should hope for coin and jackpot wins on. An empty or non-winning spin takes one life out of three and a symbol hitting the line restores lives back to three. The range for seven coin wins is x1-x50 and the range for five jackpot wins is x100-x5000.

According to the regulations and laws of the player’s home country, the bonus game can be purchased for x50.

Boilin’ Pots compared to 3 other slots by Yggdrasil

Yggdrasil Gaming has also created a new part of this “bonus game series”, which has been gaining huge popularity since the mid-2020s. What sets this apart from some other similar video slots is that the bonus game is now simpler to understand without any special patterns and there is a single line that the coin and jackpot symbols should hit. In addition, the base game has its own little hook with the Wild Respins feature.

No, Boilin’ Pots does not feature Free Spins. Nevertheless, there are some other interesting features to check out.

Yes, we’ve implemented a demo version of Boilin’ Pots so you can try it out for free.

The maximum possible win is as much as 10,000 times the bet.

The Boilin’ Pots slot was created and issued by the software provider Yggdrasil.