Animals come in all shapes and sizes. As such, everyone has their own preference or “favorite animal. However, we can all agree that the lion is one of the most impressive animals in the animal kingdom. This animal is not called the king of the animal kingdom for nothing.

The slot machine Akiva: Claws of Power by Foxium can be seen as an ode to the lion. Whether this online slot is also one of those we will claw our way into? That remains to be seen…

Don’t expect miracles from the statistics of Akiva: Claws of Power, because at first glance they look pretty average.

This is evidenced by the RTP of 96.20% and the average variance of the payouts. Also, Akiva: Claws of Power with a 5×3 playing field dimensions that we see coming by very often.

And then on to Akiva’s features: Claws of Power, of which there are exactly 4. Two of them are relatively simple and add little to the game.

Then we are talking about akiva sandstorm and claws of power feature. The link & win feature and the free spins feature make Akiva: Claws of Power, however, a lot more interesting.

The Akiva sandstorm feature can be activated at any point in the game, just like that. Akiva then changes a few symbols on the playing field, creating one or more winning combinations. This way, a spin without a combination suddenly becomes a winning spin after all.

The claws of power feature actually does exactly the same thing as akiva sandstorm. This feature, too, can be triggered at any spin. And when that happens, it shuffles some symbols on the playing field. This still creates 1 or more winning combinations. 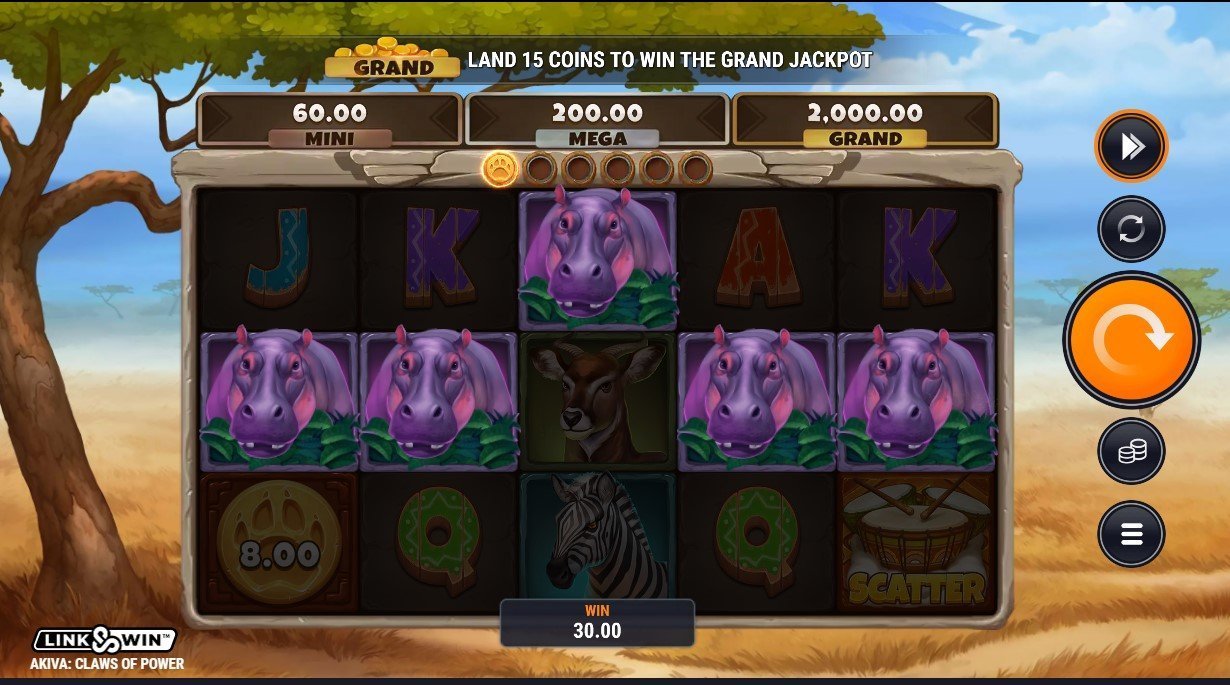 Any losing spin can turn into a winning one with the features in the base game.

In Akiva: Claws of Power look out for coin symbols that show a cash prize. By spinning at least 6 of these, the Link & Win feature is activated. The spun coin symbols are secured on the playfield, after which you receive 3 respins.

However, coin symbols can also show a jackpot symbol instead of a cash prize. These are the mini jackpot of 30x your bet and mega jackpot of 100x your bet.

The feature is over if you do not manage to spin a new coin symbol within 3 respins or if you manage to fill the entire gaming area with coin symbols. In the latter case, you will be extra rewarded with the nice grand jackpot worth 1,000 times your bet.

Akiva: Claws of Power compared to 3 other slots from Foxium

You can win 5 free spins in Akiva: Claws of Power earn 5 free spins by spinning a scatter on reels 1, 3 and 5. During these free spins, reels 2, 3 and 4 merge into a single reel. Giant symbols can then land on this reel with dimensions of 3×3 normal symbols.

For calculating winning combinations, giant symbols are imaginary divided into 9 normal symbols (except the scatter, which simply counts as 1). So because at least 9 of the same symbols always land on the playing field, the chance of getting significant combinations during the bonus round is a lot higher than in the base game of Akiva: Claws of Power.

We offer a free version of the game, so you don’t need to worry about spending any money.

The 2 special features are basically the same – one will change the symbols and the other will shuffle them in order to form winnings.

Yes, there are, in fact, 2 bonuses. There are the Free Spins and the Hold & Win bonus which also offers 3 Jackpots.