The latter will be a joint venture of the company Astro Babies and the El Salvador Government. The establishment is going to possess all features of a traditional casino entertainment complex – a gaming floor, bar, lobby, terrace. Guests will be able either to go there in person or visit it through the use of a VR headset.

The project is seen as yet another bold move of the Government. El Salvador has a relatively low economic growth, high unemployment rate, large trade deficit and an increasing percentage of people living below the poverty line. So why such a country would need a metaverse casino and most of all, why such a country would invest in crypto knowing the rapid market fluctuations?

Why Did El Salvador Buy bitcoin?

The bitcoin experiment started in October 2021 when El Salvador became the first country to use Bitcoin as legal tender alongside US dollar.

According to the President Nayib Bukele, the adoption of bitcoin would help the economy and Salvadorians living abroad, send remittances back home without paying high transaction fees.

The Government launched a digital wallet called Chivo and granted $30 to citizens who use it. However, surveys found that locals are prejudiced against the use of bitcoin citing its high volatility and lack of physical backing as main reasons for preferring the US dollar for making payments.

What's more, Chivo fell short of expectations of those who wanted to give it a chance as many people reported their bitcoins missing. That being said, the majority of Salvadorians are reluctant to use a cryptocurrency that soars and falls on a regular basis and consider it a threat for their own savings and the economy in general.

Bitcoin City Powered by a Volcano

Despite the lack of interest in using bitcoin, the tech-savvy president has come up with another bizarre idea. A bitcoin city is to be established at the base of Conchagua volcano. The city will be free of income, property and capital gains taxes. Only value added tax is to be imposed. Mr. Bukele also added that the city will have “residential areas, commercial areas, services, museums, entertainment, bars, restaurants, airport, port, rail” and the a central plaza will be designed to look like a Bitcoin symbol from the air.

Crypto mining is a process requiring abundant energy resources. The President said that they will use geothermal energy from the volcano to create new bitcoins.

The building of the new city is expected to start in mid-2022.

Future of bitcoin in El Salvador 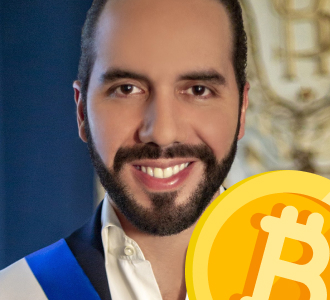 In October 2021, bitcoin has become a legal tender. Back then, thousands of people protested against the introduction of the cryptocurrency fearing that it will inject a degree of instability into the fragile economy. A few months have passed since then, but Salvadorians remain skeptic of the use of bitcoins.

Regardless, on January 21st, the President announced that he purchased more bitcoins “really cheap” taking advantage of the market dip.

It seems that it will be difficult for Bukele to fund his heavy deficit spending as the International Monetary Fund did not approve of the loan he applied for, not to mention that El Salvador can not print its own dollars.

Bukele's obsession with cryptocurrencies provoked public discontent as when he became President in 2019, he took the responsibility of defending human rights and tackling some serious issues such as the high homicide rate and the tough anti-abortion laws. Today, the President is heavily focused on making El Salvador a country from the future while turning a blind eye to its imminent problems. For now, the attitudes are largely negative and expectations are that the bitcoin will not achieve a widespread usage in the country unless the volatility settles.

Casinos of the month

Pettie is really passionate about delivering the best reviews in an easy to understand language & way.