Wild Portals Megaways is a high variance video slot produced by Big Time Gaming and released on online and mobile casinos in spring 2022.

Where we have occasionally wondered about the style of game manufacturers recycling the same themes in their casino games, we no longer wonder. In fact, Big Time Gaming has chosen such a different approach that it’s hard to know what terms to use to describe this theme, but let’s call it science fiction or, less clumsily, futuristic.

The special and free spin features on reels are easier to explain than the theme we wondered about above. The most interesting feature is probably the 2×2 “Wild Portal” symbols, which we’ll cover in the following sections, along with other details.

Wild Portals Megaways is a 6 reel wide video slot with a line count per spin of 64 to 117,649. Winning combinations require two to six matching winning symbols and/or wilds, which are also broken when in a winning combination. The payback percentage is a whopping 96.58% and, as far as Big Time Gaming knows, it’s also the only version.

In the paytable we see the 9-A card patterns and the green, blue, red and purple gems typical of BTG. The line value for the purple gems is 10x the bet on a single payline of six reels, the wilds are represented by the letters W on reels 2-5 and the scatter symbols by the golden geometric patterns.
Allowed bets start at $0.20 and can go up to $20.

On reels 2-5, we can come across 2×2 Wild Portal symbols. They are not exactly the wilds that the name suggests, but first they remove the selected card patterns from the reels and the number of these removals is ultimately the wild’s payout multiplier. 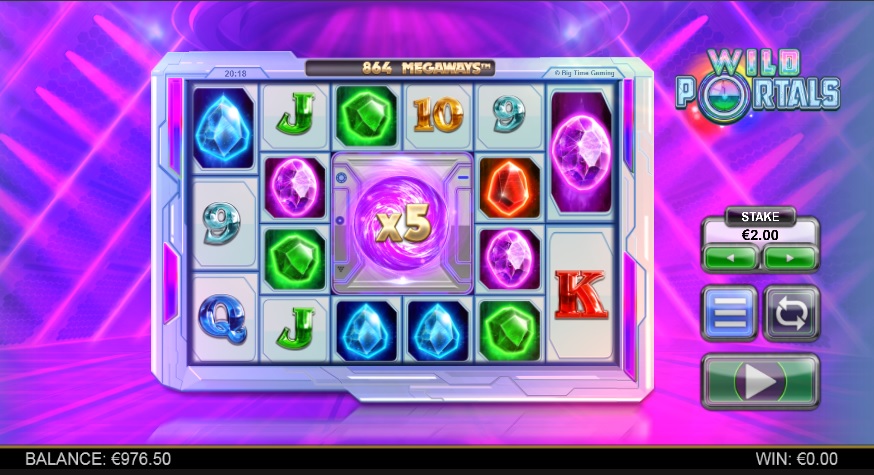 When the Wild Portal appears, it collects symbols to accumulate multipliers.

The system of bonus bets is almost identical to, say, Apollo Pays Megaways. All wins of x75 or more can be swapped directly into the free spins feature (8 free spins) and x25-x75 wins into a wheel with red and green sections according to the odds of the free spins feature. Not all of us like this either, but we feel it’s fairer and in some ways more “responsible” than direct Feature Buy.

We may be exaggerating a little, but as game manufacturers try to make finer and finer special features, Big Time Gaming shows with this almost ridiculously simple Wild Portal feature that sometimes – quite often – it makes sense to take the easy way out. It’s a style that’s garnered popularity before, with all its wild multipliers and wild-to-wild payout patterns, and why not now? The maximum payout on Wild Portals Megaways is around 29 000 x stake.

The slot was created by one of the leading Megaways software developers – Big Time Gaming.

Yes, go to the Big Time Gaming section on our website. All of their creations feature the Megaways mechanism, so choose your favorite.

When the Wild Portal symbol appears it will reveal a low-paying symbol and a multiplier. All of the same symbols in the grid are removed and for each one the multiplier increases by 1.

Yes, it is triggered by at least 3 Scatters and the Wild Portal symbol is present for the duration of the free games.