Volatile Vikings 2 Dream Drop is a war-themed online video slot developed by Relax Gaming. The action takes place on a 6-reel, 5-row grid accompanied by a Scatter Pays mechanism. You get a reward when you match eight or more identical symbols obtained anywhere on the reels.

Volatile Vikings 2 Dream Drop’s default RTP is estimated at 94.8% and its volatility is high. The maximum payout displayed by this slot is 10,000x the stake and to play it, you need to deposit an amount between $0.20 and $100 on each spin. The features of this slot are numerous and include the Dream Drop feature, the free spins feature, the Multiplier Reveal feature and the cascade win mechanism.

The Scatter Pays mechanism allows for the symbols to pay anywhere they land.

The paytable in Volatile Vikings 2 Dream Drop has many payout symbols divided into two categories. On the one hand there are the low payout symbols which are represented by four stones of different colors, including blue, green, purple and yellow. Landing 8 symbols of one type offers the reward of 0.4 to 0.5 times the bet. This reward increases from 3x to 6x the bet when 12 or more of the same symbols are landed.

On the other hand, there are high payout symbols that consist of four Viking faces and a fifth symbol that closely represents a boar. By forming a combination of eight symbols of one type, you get the reward of 1 to 10x the bet and 10 to 50x the bet from 12 or more matching symbols. Also present in the game are a scatter symbol and a bonus symbol dedicated to multipliers.

Volatile Vikings 2 vs. 3 other slots featuring the Dream Drop Jackpot

Many features punctuate your adventure

The Volatile Vikings 2 Dream Drop slot has a maximum payout of 10,000x the bet and a total of four features, which are the Dream Drop feature, the free spins feature, the Multiplier Reveal feature and the cascade win mechanism.

The cascade mechanism works as follows: when a scatter win occurs in the base game, the symbols in it are immediately removed and again fall on the reels to fill the gaps. You can get more stunts at any time as long as you form a new scatter win.

This feature is available in the base game and allows you to increase your winnings. On each spin, there are two Multiply Reveal symbols that land on reels 3 and 4. Each of these symbols has a two-digit inscription with a counter and a multiplier.

The value of the latter decreases by -1 each time a stunt occurs on the same spin. Only when the counter reaches 0 does the multiplier activate with the aim of destroying all adjacent symbols on the reels leaving the opportunity for new symbols to land.

The Multiplier Reveal symbols will also be present among the new adjacent symbols that will land. Only at the end of your spins will the sum of the collected multipliers be applied to the total winnings.

To activate the free spins feature, you must collect a total of three Scatters during the base game. Once this is done, you get 6 free spins to continue your game. With a fourth Scatter collected, you will receive an additional free spin to your counter.

Play in the free spins is much like in the base game except that when the Multiply Reveal feature is activated, it adds extra values to the multiplier in place. This multiplier will be applied to your winnings at the end of the free spins. It should also be taken into account that every time a bonus symbol is obtained, it adds an extra free spin to your counter. 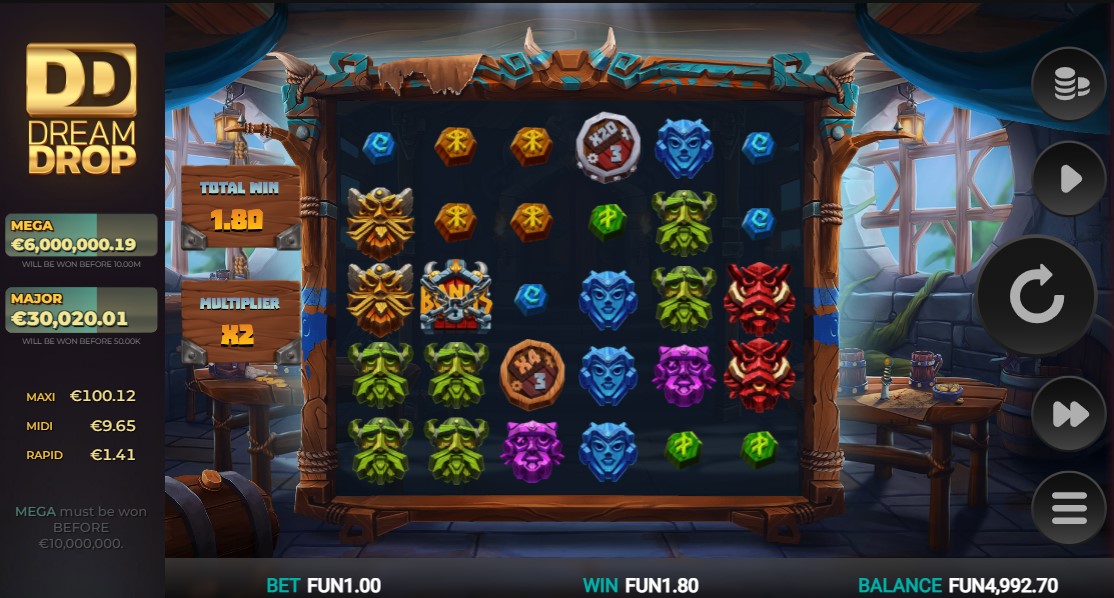 The Dream Drop feature can only be triggered randomly. Once it is activated, 5 reels appear on the play area displaying above each reel one of the jackpots listed in the game. Once the feature is running, only the DD symbols and the crates will appear on the reels.

As the feature progresses, the crates are destroyed and the DD symbols that have become sticky remain in their place. Once these symbols have successfully filled a reel, their prize is awarded.

The Volatile Vikings 2 is part of the Dream Drop Jackpot series launched by Relax Gaming.

Yes, there are. If you liked this slot, then you should try out the other parts of the Dream Drop series.

The Dream Drop Jackpot is only triggered randomly. Then you have the chance to win one of the 5 Jackpot prizes.