Ready for a day at sea? Join the daily life of a fisherman in The Rodfather Megaways slot launched in October 2022 by Booming Games and featuring a must-have fishing theme! Unlike all the fishing games we’ve come across so far, this time our fisherman is determined to bring in not only sea bass, but also other larger species such as whale, swordfish or giant octopus and this translates on the reels into rewards of up to 34,000x the bet!

The Rodfather Megaways slot machine is powered by BTG’s Megaways mechanics and features an interesting net of features including Cascading Wins, Free Spins with unlimited win multipliers as well as mystery symbols and a Fishin’ Time feature capable of collecting instant prizes.

Much like all the other fishing slots we’ve hosted lately, The Rodfather Megaways by Booming Games has a cheerful atmosphere with a half-submerged view that lets you glimpse both the underwater species and the beautiful seabed while watching the fishing boat in the middle of a sunny bay that is every fisherman’s paradise.

The Rodfather Megaways vs. 3 other slots from Booming Games

Designed with a 6 reel interface, each reel has between 2 and 7 symbols randomly on each spin and a horizontal row will always display 4 rotating symbols from right to left. This triggers up to 200704 ways to win at maximum. Highly volatile, the game’s RTP is 95.90%.

The fishing game starts as soon as you press the spin button, but be sure to choose your bet between $0.20 and $6 to start. Winning combinations consist of 3 to 6 identical symbols lined up from left to right. The weak symbols are represented by the A, K, Q, J, 10 and 9 and will pay out between 0.15x and 0.75x the bet and the seahorse, sea bass, swordfish and octopus symbols will pay out up to 1x, 2x, 3x or 5x the bet. The Wild will also be there to substitute for all other symbols except the Scatter and Value symbols.

When a win occurs, the Cascading Wins feature is triggered and causes all the winning symbols to disappear from the grid, the others fall down while new symbols fill the reels and sometimes cause new wins in a row. Aside from the stunt phenomenon, The Rodfather Megaways Slot includes Free Spins, Fishin’ Time mode, mystery symbols and other features to discover below.

PROs & CONs of The Rodfather Megaways

Get 4 bonus symbols to trigger 10 free spins. When the bonus is triggered, a x1 multiplier is activated, which will increase by +1 with each stunt and will be applied to winnings at the end of the stunts without resetting to its original value until the bonus is over.

Gold fish are special symbols with a value between 1x and 50x the bet. You will need to get the Collect symbol represented by the fisherman in order to win the values displayed on each fish. The Collect symbol can appear on the sixth reel or on the horizontal reel and will collect the value of all the value symbols and give them to players at the end of a series of stunts.

On any spin and only during Free Spins, mystery symbols can appear on the screen and change into the same symbol type. 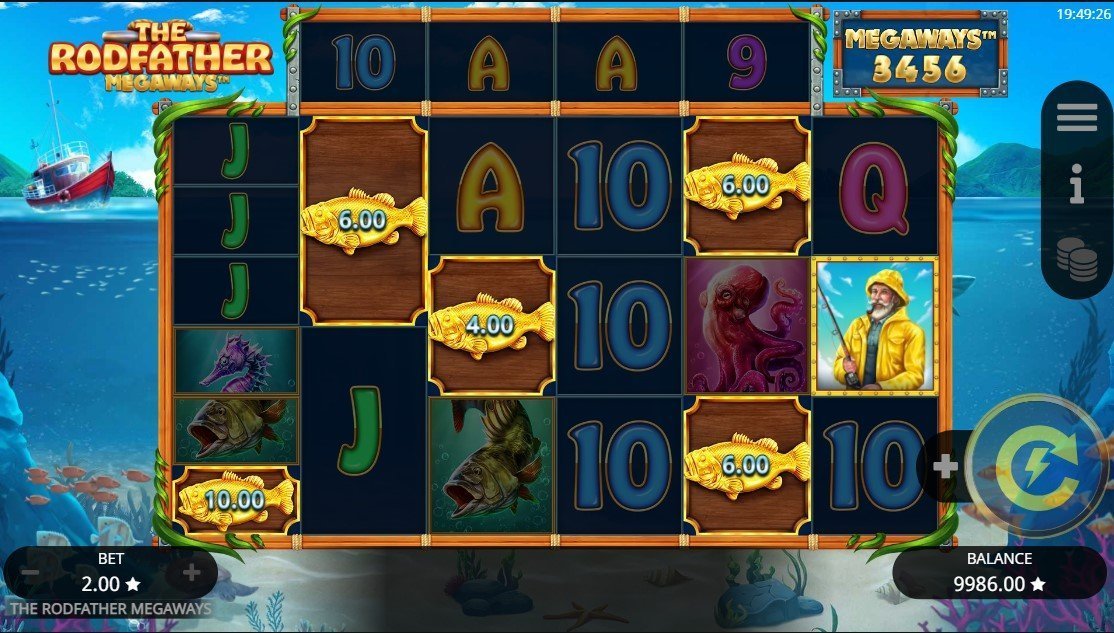 The fisherman can collect all money symbols.

This feature will force the reels to display 7 symbols to create 200704 active winning paths.

If the fishing turns out to be successful, you can win some very big rewards in The Rodfather Megaways slot from Booming Games! Most of the action takes place during the Free Spins where the multiplier increases with each stunt, but it’s also possible to hit some big catches with the Fishin’ Time feature. Many studios are jumping at the chance to show off their penchant for fishing games, it seems that a seam has been created in recent years following the launch of Pragmatic Play’s Big Bass Bonanza slot that has become very popular over time, and well it’s a successful bet for Booming Games with The Rodfather Megaways offering something different and exciting enough to get noticed by players.

The slot includes many special features including Max Megaways, Mystery symbols and a Free Spins bonus round.

We offer a free version of The Rodfather Megaways, so you don’t need to worry about spending any money.

No, this slot does not offer the Bonus Buy option.