Supplier Relax Gaming is developing a sequel to its Dream Drop and Tumble line of slots. Entitled Templar Tumble 2 Dream Drop released in November 2022, the production joins the progressive jackpot network that reserves a reward of up to 10 million euros. It is an online slot that follows the Templar Tumble game launched in 2021.

Templar Tumble 2 Dream Drop offers players a grid format of 6 reels, 7 rows and up to 117,649 ways to win. The slot reveals a setting that is heavily inspired by a typical Templar site. The game takes place in a predominantly gray world that provides a dark atmosphere. The setting is completely different from the previous slot, exposing a fortress with two statues of knights.

When playing Templar Tumble 2 Dream Drop, the action takes place on a 6-reel structure with 7 columns. To create wins, the objective is to collect identical symbols on consecutive reels starting from the left. The game features the cascade function by deleting winning symbols to fill the empty spaces. If there are no new wins, the full reward of the spin is awarded. Regarding the mathematical model, the game has a high volatility which provides a substantial payout. Its payout rate is 94%, of which 12% will be paid out in jackpots. On the betting side, the amount varies from $0.20 to $100 per spin.

Templar Tumble 2 vs. 3 other slots part of the Dream Drop series

As for the available symbols, the online slot contains diamond tiles, hearts, spades and clubs of lesser value. The list consists of other icons illustrated by trees, birds, lions and battle helmets. Getting six symbols gives a payout of 0.4 times the bet by going from 1 to 2 times the bet. However, the game does not introduce any wild symbols. 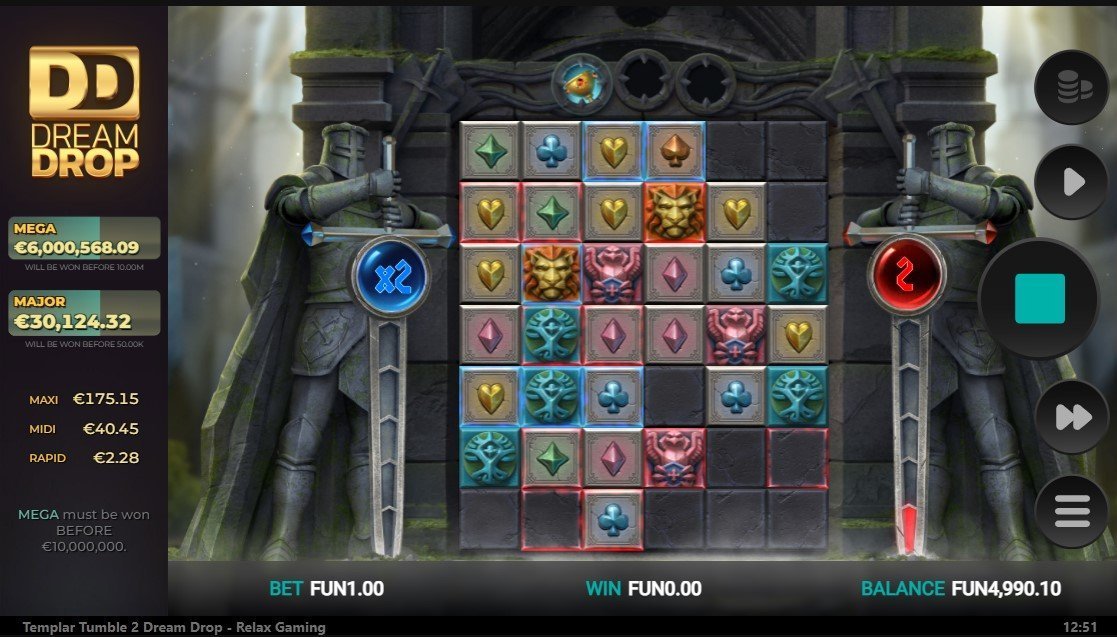 In their search for the temple, countless people have already gotten lost!

As the session progresses, certain symbols and tiles framed in red or blue appear on the screen. When these symbols are destroyed, a point is added to the red or blue collection counter. Once 5 symbols marked with the same color are removed from the grid by activating the first level of the feature. Thereafter, the five similarly colored symbols optimize the sequence, increasing the chances of winning. When the blocking tiles are removed, collecting 3 points upgrades the features. The next time the base game is rotated, the counter resets.

About the Win Multiplier, it is associated with symbols marked in blue and with each level completed, the multiplier increases by +1. This applies to the winnings at the end of the stunts. As for the symbols framed in red, they are linked to the Mystery Reveal. Each level this counter activates two mystery symbols on the reels. These icons display a regular payout symbol or a coin symbol. Coins pay out a reward worth anywhere from 1 to 100 times the bet. Mystery Reveal rises to level 21. Once active, the level increases during the same spin.

Then, landing three Scatters symbols during a game round provides 10 Free Spins. During the feature, the player enjoys the Win Multiplier and Mystery Reveal at the end of each free spin. The different formulas progress on the collection counters throughout the session. The presence of each scatter allows for an additional free spin.

Finally, it is possible to randomly activate the jackpot rounds either manually or automatically. The user is awarded a spin on a 6×7 grid of only DD symbols or blocks. If a DD symbol occurs on all six reels, the Dream Drop bonus is triggered and each reel adds one of five jackpots. In all cases, two DD tiles must be collected in order to win the Quick, Midi, Maxi, Major or Mega jackpot. The winnings are $1, $5, $100, $25,000 or $500,000 Euro respectively.

In short, the Templar Tumble 2 Dream Drop slot from the developer Relax Gaming is a win-win game with stunts, multiplier and free spins. With the mystery symbols and DD elements, the potential win without a jackpot is capped at 20,000 times the bet. This means that a big prize is up for grabs through the progressive jackpot network.

Yes. This slot is part of Relax Gaming’s Dream Drop Jackpots. So you can win 5 different jackpots.

There are a total of 5 different jackpots to be earned. The height of the Mega Jackpot can reach a maximum of $10,000,000.

The Return To Player in this slot is 94%, of which 12% goes to the progressive jackpot. This means that 82% remains for the non-jackpot portion of the slot.

Of course it is! Try your luck at Templar Tumble 2 slot machine in the safety of one of our recommended casinos. We suggest you take a look at our page dedicated to trusted casinos so that you can enjoy yourself with complete peace of mind.

Spirit of the Beast