Join a journey that will take you back in time to 1881. This exciting adventure takes place in the online slot game Taco Brothers Derailed from the renowned software developer ELK Studios. Join the heist with the three brothers Taco Paso, Pepe and Pico, and they will help you win huge bonuses.

Taco Brothers Derailed is an online video slot with 6 reels, 4 rows, where by spinning you have up to 466 ways to win. Walking wild, multiplying rewards and special bonus games in which the game will start paying prizes for 3 or more of the same symbols that appear successively from left to right according to the specified method of winning.

As far as the average player return in this game is concerned, there is an average RTP of 95%, in which the reels have a moderate to high level of volatility. The long term spins on the reels can pay you up to 10,000 times your bet.

When you enter the Taco Brothers Derailed online slot game, you will find a beautiful cartoon-themed graphic design. The plot of the game takes you on a journey to the small village of Santa Maria which is about to have a train carrying gold. The three Taco brothers have all planned this heist. Join the robbery with them and don’t get caught for big money.

Of course, the Taco Brothers Paso, Pepe and Pico will definitely be the highest paying symbols in the game. All three have the highest payout rates of 5, 10 and 50 respectively, while the lower paying symbols are also designed to be relevant to the story. There are bomb symbols, whistles, animal skulls, lanterns and safes. They have payout odds of 2, 1.5, 1, 0.75 and 0.5 times the bet respectively. 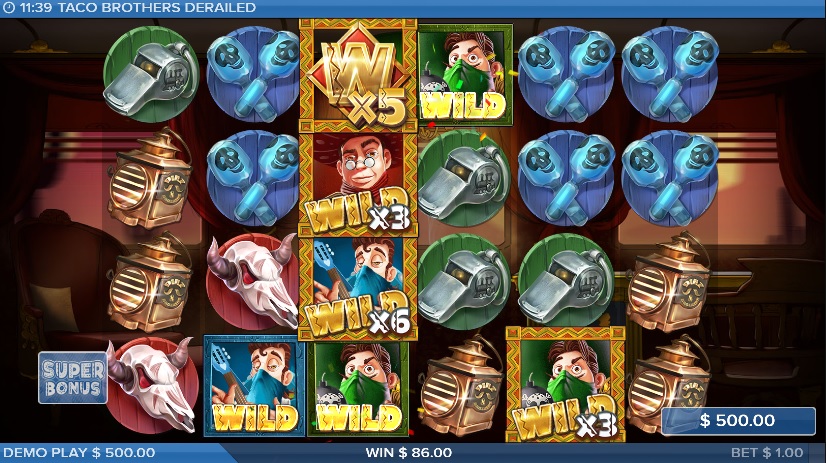 Walking wild multipliers can multiply themselves on the grid during the bonus.

There are different wild symbols in this game, including normal wilds, multiplier wilds and walking wilds. When a walking wild appears, it moves one position to the left and results in a free spin being repeated by the reels. It is important to note that bonus symbols that appear during this period will be locked and held in their original position. The re-spin ends when the symbol moves away from the reels.

When the bonus game starts, three taco brothers will appear on reel 6. They will be a wild symbol with a random multiplier and will move one position to the left with 1 free re-spin.
Meanwhile, the Captain symbol can appear on reel 1 to trap the three brothers closest to reel 1 and you will be able to rescue them from the senorita symbol. It will defeat and free the three brothers and bring them back to Reel 6.

Players can also immediately purchase special features from the X-iter feature. You will be able to activate the features you want as you wish.

We can assure you that this adventure will surely entertain you. Plunder gold in the bonus game if you survive the capture. Let us tell you that the big cash prize will certainly accumulate in front of you. You can start having fun this time in trial mode. It will be available at the major online casinos partnered with ELK Studios.

The max. win of Taco Brothers Derailed is 10,000x which is a great improvement compared to the previous parts of the slot series.

If you liked this slot, you should definitely try out the other parts of this series: Taco Brothers and Taco Brothers Saving Christmas.

Yes, there are a few. Players can benefit from wilds, multipliers and a Free Spins bonus.