Climbing to the top of Mount Olympus will allow you to face the wrath of the gods in the succession of the classic game, Rise of Olympus 100 slot developed by Play N Go and released in November 2022.

Not much has changed aesthetically since the previous version of the game dating back to 2018, the Olympian gods still prevail on the grid while the atmosphere and visuals evolve over the spins depending on the active god present on the side. Whether it’s Zeus, Hades or Poseidon, these mythical gods will influence the course of the game with specific characteristics as they seek to capture the power of Olympus.

Heavily inspired by the deities of Ancient Greece, Rise of Olympus 100 slot consists of a 5×5 reel grid running on Cluster Pays mechanics. With high volatility and an RTP of 96.20%, the game has plenty to entice you as it takes players on a quest for divine power. Up to 100 Free Spins and up to x100 payout multipliers may allow you to reach the ultimate reward of 15,000x the stake. You might also find the adventure exciting with multiple features such as Wrath of Olympus mode, Free Spins or Hand of God mode in three forms.

With the Cluster Pays win mechanism, wins are earned when three or more identical symbols line up in a horizontal or vertical line. A bet between $0.20 and $100 will get you into the action. Among the symbols present in Rise of Olympus 100, the lightning bolt, trident, helmet or lyre can pay between 0.10x and 3x the bet. The Zeus, Poseidon and Hades characters will pay between 0.30x and 10x the bet and if you hit a mixed combination then you will win between 0.20x and 5x the bet. The Pegasus horse is a Wild and can substitute for any symbol while paying 50x the bet at the maximum. Wild symbols are removed from the grid if no other symbols remain on the screen.

Triggered randomly on a losing spin, this feature features the various powers of the gods Hades, Poseidon and Zeus to help players create a win. This can include symbol transformations, adding Wilds or deleting symbols depending on the god:

PROs and CONs of Rise Of Olympus 100

When the gauge is fully charged, a free spin is won. One of the Hand of God features will be released with each stunt that does not produce a win, until all three gods have released their respective power.

If the grid is completely emptied following this bonus round, then the Free Spins will be triggered thereafter.

Before the free spins start, you will need to choose one of the three gods that each offer a free spin option with their power:

The win multiplier is carried over from the Wrath of Olympus bonus to the Free Spins and will only reset to zero at the end of the bonus. The multiplier can therefore gradually increase to x100 during the free spins and the power of the god will be triggered on all losing spins. More free spins can be won by completely recharging the gauge, it will be possible to win 4, 3 or 2 more depending on the selected deity for a maximum of 100 free spins in a row. 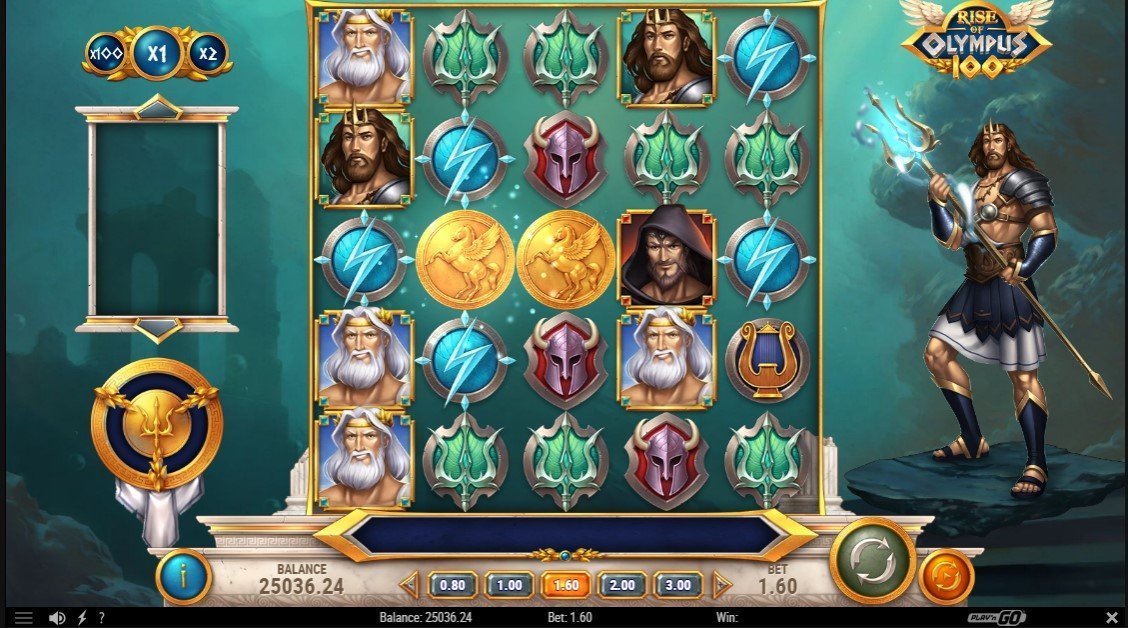 During the base game, the Gods will help you with different boosters.

By completely clearing the grid of symbols, outside of the Wrath of Olympus mode, the player will win the equivalent of 50x the bet.

Enjoy the wrath of the primordial gods

In the Rise of Olympus 100 slot, the gods are on your side to bring you the luck you need to win Olympic prizes. The features manage to complement each other while triggering each other. It starts with a cascade when a winning line occurs. Not only will cascade wins benefit from progressive multipliers, but losing spins can at the same time be made up for by one of the Hand of God modifiers. Put your trust in one of the gods during the Free Spins feature to tap into their power and expect to win up to 15,000x the stake, a much higher maximum reward than the original Rise of Olympus where the cap was only 2,500x the stake.

Yes, this slot is already available in major online casinos around the world. Make sure to choose a reputable casino operator before depositing your funds.

No, this slot does not offer a bonus buy option.

You can try out the demo version directly on our website. If you mean to deposit real funds and try your luck with Rise Of Olympus 100, you can check our list of trusted casinos and find one that suits your needs best.

Riddle Reels: A Case of Riches

Merlin and The Ice Queen Morgana