Rainbow Gold is not the first ever Irish themed slot by Pragmatic Play, and other providers as well. Nevertheless, all slots vary in specifics and features. Due on March 17th 2022, we will reveal now what to expect in Pragmatic Play’s newest addition.

Rainbow Gold offers a 5×3 reel grid interface with 20 paylines on this slot, and a maximum payout of 4000x is available in the base game and during the bonus round. With a default RTP of 96.45%, this slot has a very high volatility. The RTP, whatsoever, could widely vary depending on the jurisdiction and the online casino. 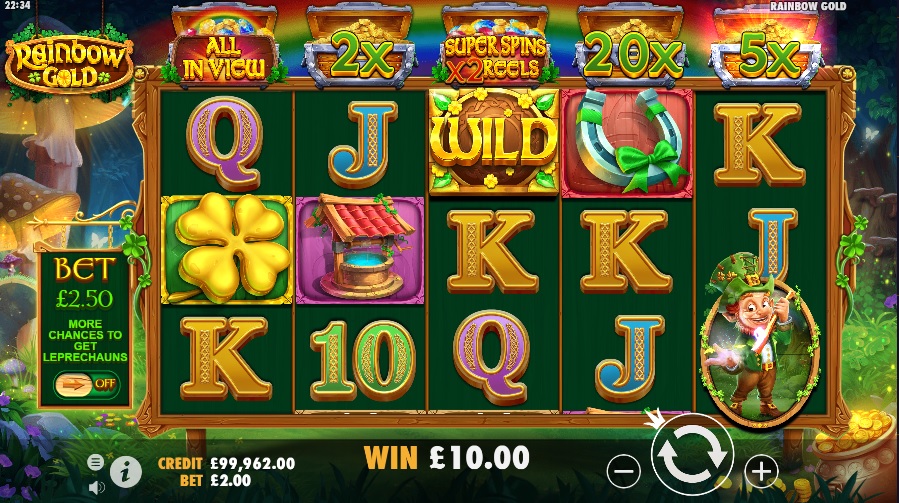 Whenever the Leprechaun appears on a certain reel, it awards the prize above it.

On adjacent reels, all symbols pay from left to right beginning at the left side of the screen. There are three groups of symbols with different payouts and functions, as follows:

PROs and CONs of Rainbow Gold

How to win on Rainbow Gold?

The bet will increase by 25%, giving you more chances to land the leprechaun symbols.

In the game, all five reels are marked with different prizes at the top. The leftmost prize moves one position to the left every spin, disappearing from sight to be replaced by a new prize on the right.
The feature is activated every time the Leprechaun appears, the prize at the top of the reel it landed on will be awarded. Here are the prizes:

Rainbow Gold vs. 4 other slots with Prize reel on top

Activating this feature requires a leprechaun symbol appearing on the reel with the Super Spins prize on top.
In the feature, four 3×5 grids are used. You’ll notice that each grid has its own tracker, just like in the base game. Despite this, the prizes offered by the Free Spins game mode differ from those in the base game:

As any Irish themed slot goes, the gameplay is quite always very cheerful and colorful. Same goes here, in Rainbow Gold. The slot is sufficiently different from other creations in terms of features. The randomly appearing Leprechaun is a nice touch, but the question is how often will it appear. Also, the free spins on 4 game boards seems really promising. Now, it is left to see what the player’s feedback will be once the game launches on March 17th.

In Rainbow Gold by Pragmatic Play there are Free Spins, Random base game Prizes, Free Spins modifiers and Ante Bet.

The game comes with extremely which means that you should expect some dryness before you score a big win.