Join a bunch of crafty felines in Phat Cats Megaways slot developed by Kalamba Games and released in November 2022! The felines are busy doing business and players are enjoying it with mystery symbols, lock and upgrade symbols, coins and Free Spins that can occur on the screen of this slot.

Inspired by the casino atmosphere with an ounce of mafia, the scene of Phat Cats Megaways slot takes place not far from the hotels and casinos of a megalopolis, more exactly in the big boss’s office where casino chips are scattered on the table and the decoration reminds of an era marked by the Prohibition. The funky and bluesy atmosphere also brings a more casual touch reminding us of the main action movies whose script revolves around a casino robbery.

The Phat Cats Megaways slot delivers a grid consisting of 6 reels where each reel can contain a variable number of symbols on each spin. To be precise, rows 2 to 5 are systematically occupied by 3 to 8 symbols while the rows at the ends can contain between 2 and 7 symbols at each spin. This familiar Megaways layout can unlock up to 200704 ways to win. With this ingenious feature comes high volatility and an RTP of 96.22%, ensuring intense gaming sessions that are sometimes marked by the arrival of big prizes that can reach a ceiling of 20,000x the bet.

Successfully winning at Phat Cats Megaways does require a wager, however, and this can vary with each spin from $0.20 to $50. To win, 3 to 6 identical symbols lined up on adjacent reels and from left to right are required. The A, K, Q, J and 10 symbols pay between 0.05x and 0.20x the bet. The various felines will pay between 0.10x and up to 3x the bet for the easily recognizable pattern as a tiger in a suit.

Of course, many other elements are there to enhance your winnings in Phat Cats Megaways, this starts with the Wilds capable of substituting for all but the special symbols we’ll list. 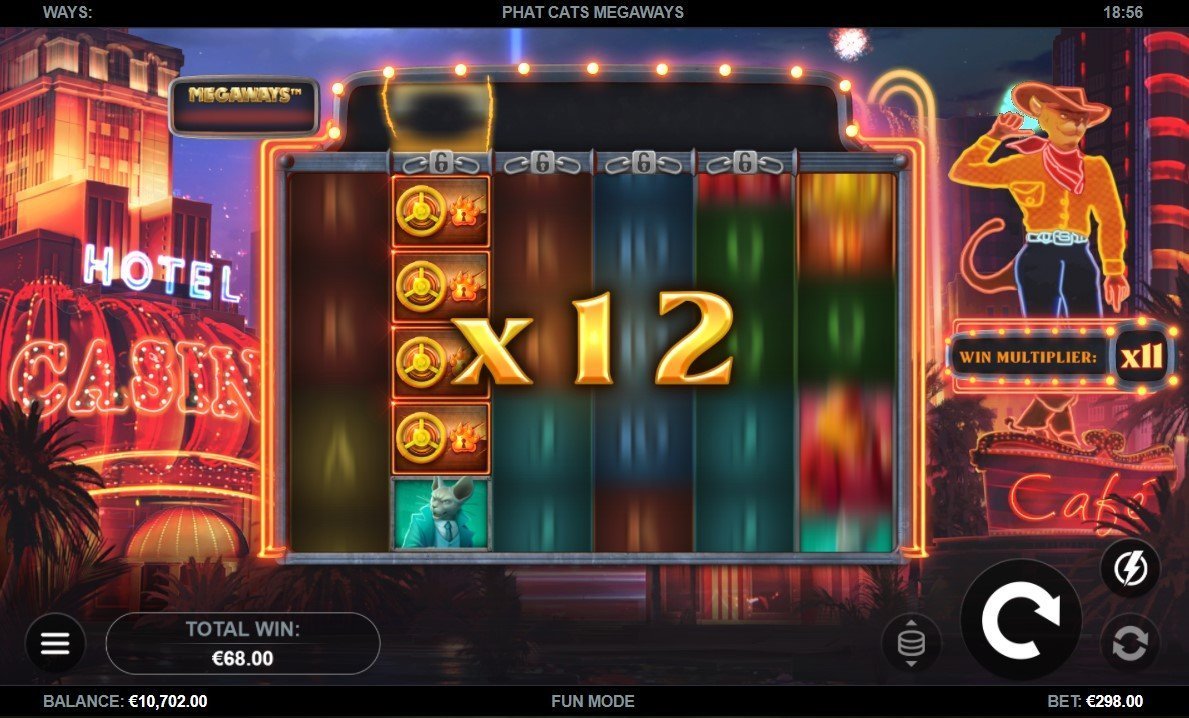 Mystery symbols represented by chests are groups of symbols that turn into a symbol type after each spin. During the spin, the reels with mystery symbols displayed move down one position.

Coin symbols can appear on the reels only as a result of mystery symbol transformations. Each coin has an associated multiplier between 1x and 1000x. With each coin, the player wins the prize multiplied by the bet.

Upgrade or lock symbols are special symbols that appear on the horizontal reel above the reels. They will only appear if at least one mystery symbol is present on their corresponding reel. These upgrade symbols lock onto the corresponding column and increase the number of rows for the next spin.

Phat Cats Megaways vs. 3 other slots from Kalamba Games

Three bonus symbols represented by the purple car activate the Free Spins. The Free Spins bonus starts with exactly four active rows on reels 2 and 5. These reels will be fully covered with Mystery Symbols. The Free Spins continue to be played in an unlimited fashion until there are no more mystery symbols visible on the reels.

In addition, a win multiplier increases by x1 after each spin during Free Spins so that each win is multiplied by this multiplier before being paid out.

You can integrate the bonus feature directly by purchasing the option for 149x the bet.

Do business with the cats

Up to 20,000x the bet is the prize you can win in the Phat Cats Megaways slot from Kalamba Games! After multiple tests we believe that this amount is attainable exclusively during the Free Spins where the spins continue as many times as there are mystery symbols on the screen. With each spin, whether it’s a winner or a loser, the win multiplier increases progressively, making it easier to get real wins.

Of course you can! The slot is perfectly optimized to be played on all sorts of devices – mobile and desktop.

When starting the bonus, you get unlimited free games that you can run out of only when no mystery symbols are in sight. A progressive multiplier is also in play.

Players can win up to 20,000 times their current placed bet.