Provider ELK Studios takes players on an adventure with this Pacific Gold slot. The game offers multiple features and dynamic reels that reserve interesting wins throughout the spins.

At first glance, Pacific Gold slot reveals a rather dark setting that resembles a watery graveyard. The interface exposes a game grid consisting of 6 reels, 4 rows and 4,096 ways to win. Technically oriented, the slot has an RTP of 95% as do most Elk slots, high volatility and a chance of winning up to 10,000x.

In the background, a World War II plane wreck is revealed making the visual almost eerie. Colored symbols appear on the reels, each with its own characteristic. As for the soundtrack, the music remains dramatic and offensive allowing you to enjoy an exciting session.

Pacific Gold vs. 3 other slots from Elk Studios

Accessible on all devices, the online slot provides a range of bets between $0.20 and $100 per spin. This means that the game is suitable for all players, from beginners to the most experienced.

At Pacific Gold, players have 4,096 to 262,144 ways to win. In order to form a winning combination, it is sufficient to collect at least three identical symbols on adjacent reels starting from the left side.
On the paytable, the game contains 12 regular payout symbols. The first four represent symbols from a deck of cards from 10 to A that are worth only 0.3 times the bet. As for the remaining symbols, the four colored icons grant a value of 1 times the bet for six of a kind while the other three look like animal masks. Accompanied by the character Kane, they award wins worth 2 to 5 times the bet when lining up six of this type.
Finally, the Wild symbol is present and replaces any other symbol and occurs randomly on the grid. 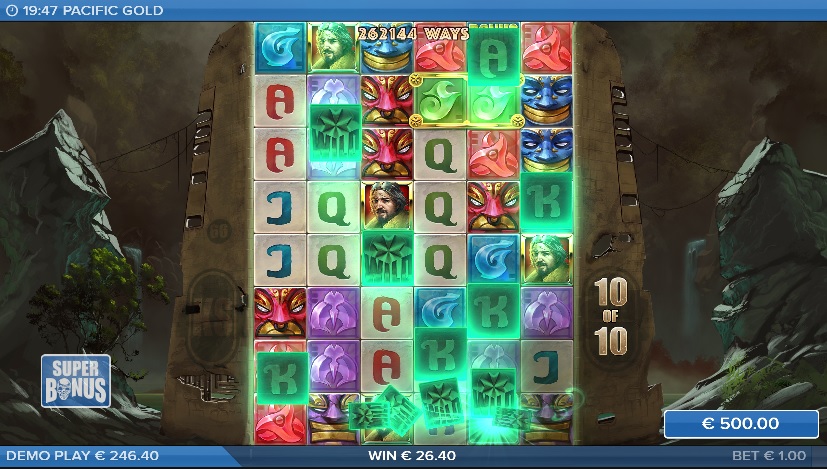 When the Free Spins end, the Ghost Box will release all collected symbols to create more winnings.

Right away, the avalanche system occurs when winning combinations appear. The symbols involved are removed, making room for new ones. The avalanche system continues as the wins are made. As a bonus, the process adds another row and maximizes the number of rows to 8. This applies to the winning possibilities by increasing the maximum to 262,144 ways to win.

Next, the slot introduces different symbols in the format Low, Mid, High or Wild. They come as follows: normal 1×1, Super 2×2, Mega 3×3 and Epic 4×4. The 1×1 size symbols have a set of 4 similar symbols. With each stunt without the Power Stack symbol, its value increases by +2.

For the Pacific Wave formula, it is a horizontal tile of identical paying symbols of size 1×2, 1×3 or 1×4. When empty slots occur under a wave, the reel is filled with 1×1 wild symbols. Subsequently, the avalanche removes the waves from the Pacific.

Speaking of the Ghost Box feature, it collects winning symbols including large symbols picked up in their 1×1 size. In the absence of wins, the box explodes, removing several icons from the grid and distributing the collected symbols line by line.

On the free spins side, getting 3, 4, 5 or 6 bonus symbols grants 10, 15, 20 or 25 free drops. During the sequence, the player accesses a maximum of 8 lines of high and each new drop activates the security level throughout the feature.

Finally, by increasing the bet, the player has access to various bonuses through the X-iter menu. In total, there are five options available including the large symbols, the Pacific Wave, the Ghost Box, the bonus that grants 100 times the bet and the Super Bonus. The latter requires a deposit of 500 times the bet to trigger a bonus round associated with a persistent Ghost Box.

In conclusion, the Pacific Gold slot from developer ELK Studios introduces some exciting new features. From the Ghost Box to the Pacific Wave feature, each fits the Gold mechanism and offers a jackpot of up to 10,000 times the bet.

The maximum possible payout in Pacific Gold is capped at 10,000x.

Yes, this slot is perfectly suitable for any device (mobile & desktop).

Yes, this slot definitely has many things to offer. Some of the features include Free Spins, Colossal Symbols and Symbol Collection.

Yes, you can try out the demo version on top of the webpage.