Developer Pragmatic Play takes players deep into a mine in its Old Gold Miner Megaways online slot. Big wins await them as they play the 6-reel, 2-7 row grid with up to 200,704 ways to win. The session features exciting free spins and the contribution of the multiplier.

As the title suggests, the Old Gold Miner Megaways game takes place in a mine shaft housing many matching equipment. Users discover a dark setting with the lanterns and the old wagon running on the rusty rails. Two animal characters are featured including the mole and the dog. Equipped with an oil lamp and specific tools, the quest for gold nuggets begins and marks the start of the session.

Old Gold Miner vs. 3 other Megaways slots from Pragmatic Play

As for the game board, the wooden structure has different symbols that immediately refer to the theme. Each one has a specific value and grants rewards according to their appearance on the screen. In all, the slot has 10 regular payout icons including 10-A royal cards, mining materials, lamps, carts, dogs and moles. Obtaining six of them awards a prize worth 1 to 1.25 times the bet or 1.25 to 20 times the bet. In addition, the game also contains a wild symbol representing a bearded man. It appears on all reels except the left one and replaces any symbol except the Scatter. When it is involved in a win in the base or bonus game, the win is doubled.

In terms of configuration, the Old Gold Megaways slot machine grid consists of 6 main reels each hosting a maximum of 7 symbols. The game also includes a horizontal bonus reel containing 4 symbols. Using the Megaways mechanism, this layout can lead to 200,704 ways to win. As for the payout ratio, players have access to several versions of RTP, with the favorable percentage increasing from 96.56% to 96.67% upon activation of the Ante Bet or purchase of bonuses. As far as betting is concerned, the amount varies from $0.20 to $100 per spin. The bet increases by 25% when the player activates the Ante Bet. This action doubles the chances of triggering free spins. 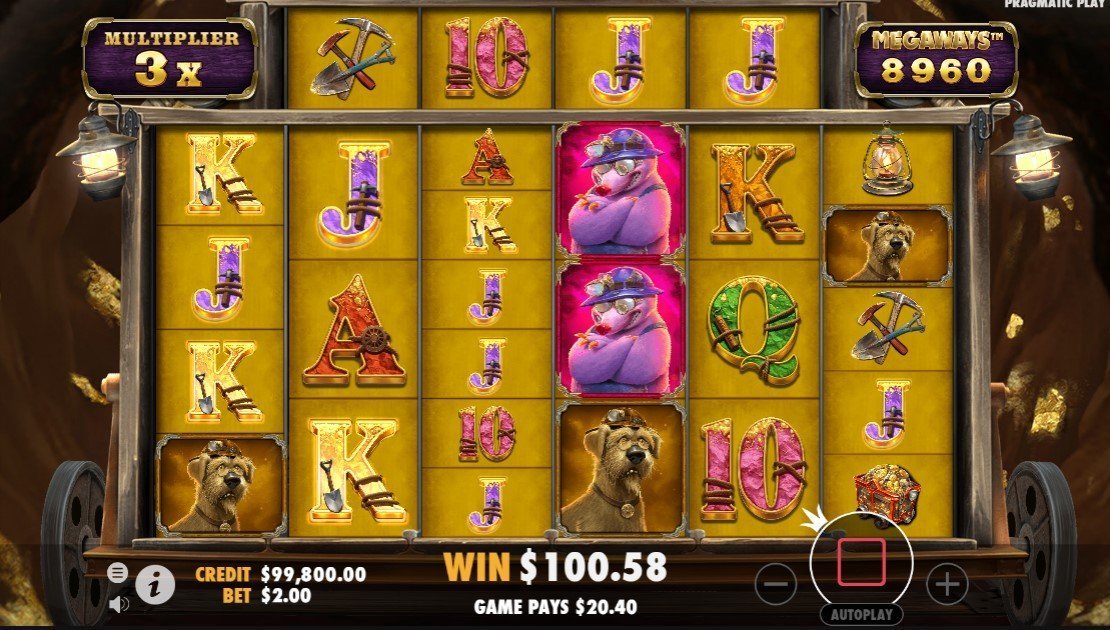 Enjoy a total multiplier and wild multipliers during the Free Spins.

At Old Gold Miner Megaways, bettors have access to features favoring avalanches and Free Spins associated with a win multiplier. Speaking of free spins, landing 3, 4, 5 or 6 gold nuggets triggers the feature and pays out a payout worth 5×, 10×, 20× or 100× the bet respectively.

Before the free spins begin, a Wheel of Fortune with two rings is activated and spins. The first ring displays the number of free spins and the second reveals a permanent win multiplier. During the spin, the multiplier is applied to the total win of each free spin. However, it does not increase in value after drops unlike other Megaways slots.

On the other hand, the presence of three or more Scatters reactivates the feature and makes the Wheel of Fortune spin again. A number of free spins and random multipliers are added to the existing values.

Finally, players have the option to purchase the free spins bonus round. The process costs 100 times the initial bet and continues with the Ante Bet inactive.

Finally, the Old Gold Miner Megaways slot from provider Pragmatic Play introduces few features, but consistent rewards are available. The Megaways engine optimizes the odds of winning. The game’s jackpot is capped at 5,000 times the stake, which is lower than previous productions of this type.

If you choose to activate the Bonus Bet feature, it will increase your current bet by 25% and will therefore increase your chances of winning the bonus.

Pragmatic Play is a popular provider and is available at many online casinos. You can try the game in demo mode on our website. If you want to play for real money, check out some of the websites of our list of the best options for playing Old Gold Miner.

Yes, any player has the opportunity to get free spins while playing this game. However, there is no Jackpot, unless there is an ongoing one in the selected casino.