If you are planning a trip to Japan, wait until you discover the land of the rising sun virtually through the Neko Night Dream Drop slot released in September 2022 by Relax Gaming. This Dream Drop progressive jackpot slot offers a slightly futuristic Japanese atmosphere to players. The addition of striking features such as Neko Respins, Free Spins and the Spin jackpot will make the moment even more attractive.

The scene takes place at night on a small neon-lit Tokyo street lined with shops. There is also a sushi restaurant, as shown in the amusing introductory cinematic. In this cinematic, we can see the maneki neko cats catching fish for the restaurant’s customers, and players will be delighted to find these lucky felines positioned on the reels to bring us the luck we need to win.

Consisting of a 5×4 reel grid, the Neko Night Dream Drop slot has 1024 winning paths and high volatility. Its RTP is only 93.89%, which is impacted by the presence of the progressive jackpot. It will still be possible to generate winnings of up to 20,000x the bet outside of the various progressive jackpots to be won. 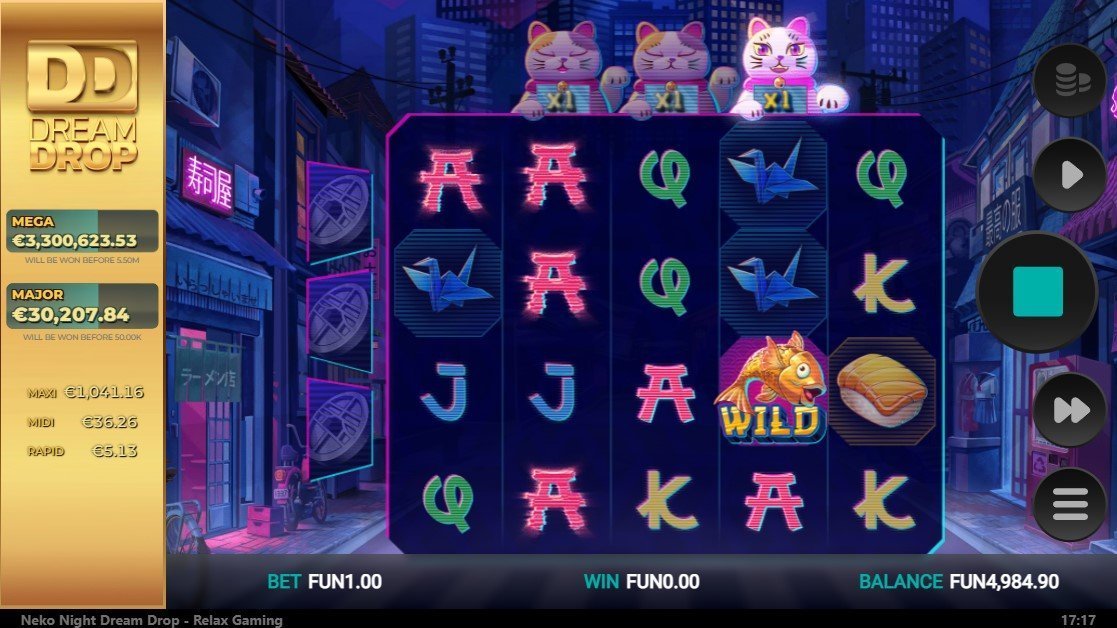 Neko respins are available during free spins, but the wild multiplier values do not reset between game rounds.

After placing a bet of between $0.20 and $100 per spin, you will be immersed in the unique atmosphere of Japanese nightlife. The reels will start spinning and you will have to match 3, 4 or 5 identical symbols from left to right on the reels starting with the leftmost one. The A, K, Q and J symbols pay between 0.30x and 1x the bet, origami, sauce and sushi pay from 0.50x to 4x, 6x or 8x the bet and Daruma and the girl pay up to 15x and 20x the bet.

Also keep an eye out for the carp wild, this important symbol is the origin of the Neko Respins as well as replacing all the symbols in the game.

Wilds will be present on reels 2, 3 and 4 of the game. By landing Wilds, you will trigger a re-spin and increase the value of the +1 multiplier applied to any Wild on the same reel in subsequent re-spins. The appearance of new Wilds rewards an additional Neko Re-Spin each time. Re-Spins continue as long as there are new Wilds appearing on the reels and wins formed with multiple Wilds will have their multiplier value multiplied together.

The Wild multiplier value is displayed above reels 2, 3 and 4 and resets at the end of each spin during the main game.

The lucky coins are the Scatter symbols, find 3 of them to trigger 8 Free Spins. The Neko Re-spin mode is activated during the bonus and the Wilds multiplier is not reset between spins. An additional Free Spin is earned for each Scatter that appears during the Free Spins.

The Dream Drop Bonus is played on a 5×3 reel grid with each reel featured by one of 5 jackpots: Rapid, Midi, Maxi, Major or Mega whose values are displayed on the left of the screen.

Only Golden Koi Dream Drop symbols can appear on the reels, these symbols will be collected and spins will play until the required number of Golden Koi to win one of the jackpots has appeared on a reel. It will take 2, 3, 4, 5 or 6 depending on the jackpot.

Relax Gaming’s Neko Night Dream Drop slot is a great title if you like the kawaii and neon futuristic Japanese atmosphere. This game reveals most of its potential during the Neko Re-Spins or during the Free Spins, but where the biggest prizes are to be reaped is when you manage to hit the Jackpot Spins and the Dream Drop Bonus.

There are a total of 5 different jackpots to be earned. The height of the Mega Jackpot can reach a maximum of $10,000,000.

The Return To Player in this slot is 93.89%, of which 12% goes to the progressive jackpot. This means that 81.89% remains for the non-jackpot portion of the slot.

Of course it is! Try your luck at Neko Night slot machine in the safety of one of our recommended casinos. We suggest you take a look at our page dedicated to trusted casinos so that you can enjoy yourself with complete peace of mind.

Yes! To make this game easier, it has been designed with an auto-game feature. This feature allows you to instantly launch spins between 10 and 100.