If you’re a true fan of the hit Netflix series, it’s unlikely that you won’t recognize the characters in the online slot game Narcos Mexico from software developer Red Tiger. The inspiration for the design comes from the hit series Narcos Mexico, which created its first season in 2018. It tells the story of a criminal drug trafficking gang. You have to find the symbols of these criminal gang members to find great cash prizes in this game.

Narcos Mexico is an online video slot that plays on 5 reels, 3 rows and offers 243 different pay modes to win. In addition, in this game there are many special features that will give you a chance to win up to 10,486 times your bet. It has a theoretical average RTP of 95.7% and is also very volatile.

In this game there is a high quality graphic design. The background is set in the mansion of the drug dealer. To add to the experience, there are two cars that were shot with bullet holes all around them. The background music will also be the sounds you hear in the series. Overall, this is a brilliantly designed game. 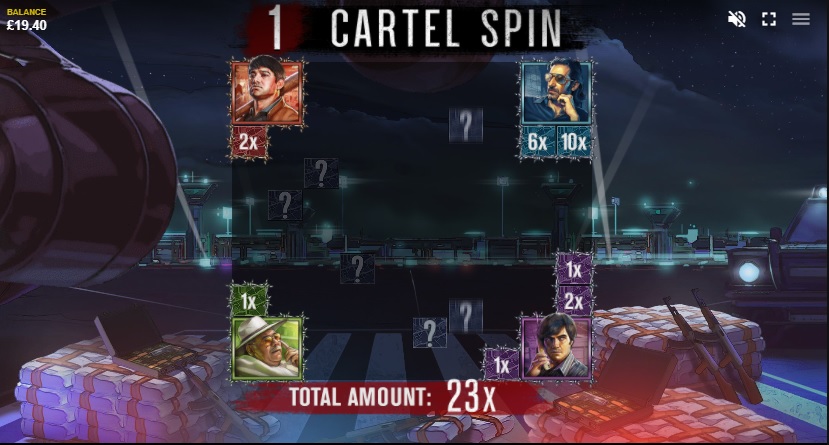 During the Cartel Spins, all gangsters acquire territory with multipliers.

The betting range is a bit reduced, offering a minimum bet of $0.10 and a maximum one of only $10.
Of course, the four main character symbols have the highest payout rate. They can pay you prizes ranging from 0.50 to 5 times your bet. For the low payout symbols they will only pay you 0.10 to 1 time your bet.

The symbol with drug parcels is a wild symbol that can be used in place of all normal symbols and since this is a very volatile online slot machine it reduces the average payout. But you will have a chance to win even bigger rewards in a short time. This game can pay out up to 10,486 times your bet.

Narcos Mexico vs. 3 other slots based on TV Series

As you collect three or more Cartel Spins scatter symbols in the main bonus game, you’ll receive three respins. You’ll see the four cartel leaders locked in their corner positions, which will begin the Cartel War feature. Increasing their territory by claiming the Mystery Territory symbols alongside their turf is how each cartel builds their territory.
Eventually, each cartel leader will start claiming a territory as their own. At that point, the leader with the biggest territory takes over the rival’s territory and expands their own. At the same time your winnings grow.

These two bonus symbols come with powerful modifiers that can boost potential winnings throughout the Cartel Spins bonus game:

One of the four cartel leaders will randomly call after any winning spin after you’ve won, instantly doubling your wins.

A supply of wild packages can be dropped randomly onto the reels by an airplane flying across the screen. You can get one, or multiple, wild packages.

In the Win Exchange feature, you can exchange your winnings of 100x your stake or more for the Cartel Spins feature. The remaining amount above 100x is deposited as cash. Cartel Spins offers the chance to win the bonus game, but you then run the risk of losing your winnings.

The slot has a very simple game play but an abundance of special features that will allow you to win more than 10,000 times your bet. You can play this game on all supported devices. Something that always gets us is when slots (including this one) add one or more random features in the base game. This way the whole experience is boosted and you won’t be sitting dull waiting for the Free Spins.

Yes! We offer a free version of Narcos Mexico, so you don’t need to worry about spending any money.

The Exchange Feature in Narcos Mexico allows you to exchange a winning of 100x for triggering the Cartel Spins.

Yes, you can definitely play Narcos Mexico on any device of your liking.

In the Rabbit Hole