Everybody has watched “Who wants to become rich?” and probably dreamed about sitting in the chair aiming for the last question and the biggest prize. Big Time Gaming is making that possible now with the release of Millionaire Rush Megatrail. Now, there won’t be any questions so don’t feel like you should prepare beforehand. You just need to sit back and spin the reels.

Millionaire Rush Megatrail is a high variance video slot produced by Big Time Gaming and released on online and mobile casinos in June 2022. The theme is inspired by their previously used “Who Wants to be a Millionaire” show with its studio and familiar logo.

Even if there is nothing new in the theme, what makes this release different is that BTG is now introducing us to their new Megatrail game engine, which they have combined with the Megaclusters platform. We will write more about the principle of Megatrail, as well as other details, in the following chapters.

Details of the Millionaire Rush Megatrail

Millionaire Rush Megatrail is a grid slot up to ten reels wide and the same number of rows high, with up to one hundred (100) winning and/or special patterns per grid. Winning combinations require a group of at least five matching winning patterns and/or wilds.

In the paytable, we see turquoise, yellow, orange, green, blue, red and purple gems, with the main winning pattern being worth 50x the bet for a group of more than 25 winning patterns. Among the special patterns, the wilds can be identified by the golden W’s with a rainbow coloured background.

The idea behind the Megaclusters mechanic is that all the patterns in a winning combination are broken, leaving four new patterns in each frame. For example, if the default grid is five reels wide and five rows high, and there is one winning combination pattern at the bottom, the bottom row will be transformed into a six reel wide grid. The grid is reset before a new round. 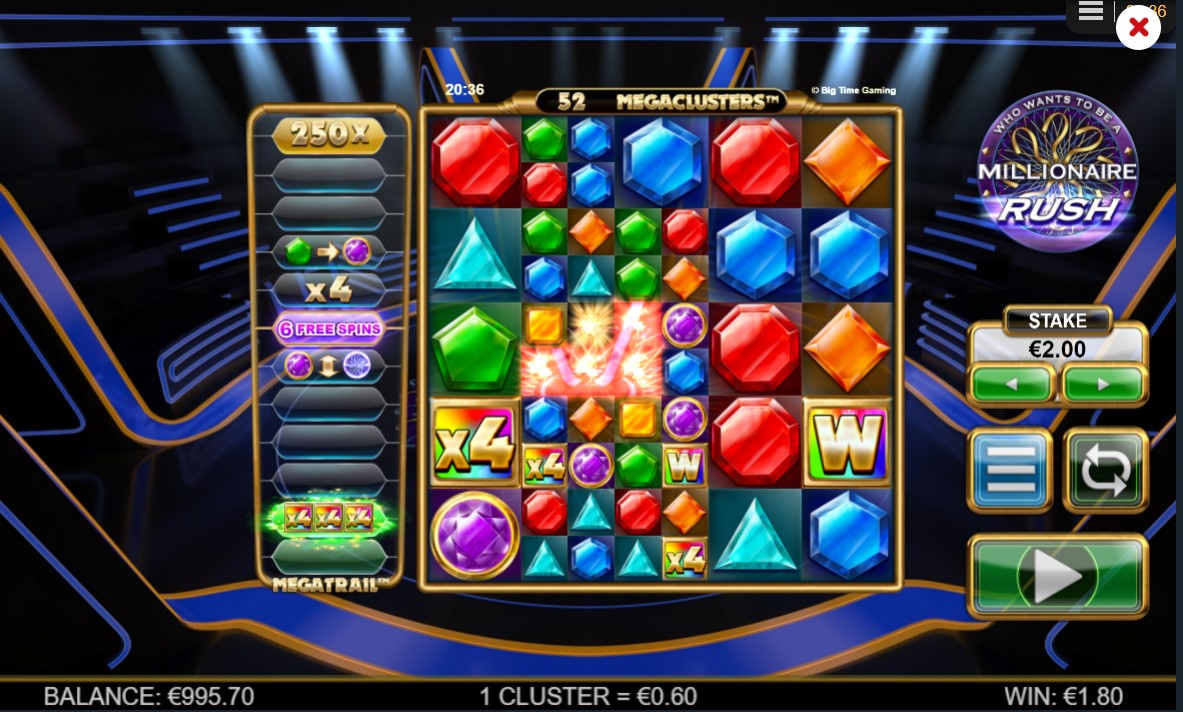 Cascades lead to different boosters such as multipliers and symbol transformation.

Then there’s the Megatrail mechanic. On the left-hand side of the game screen (computer browser) is a 12-tier meter, with a free spins feature on the seventh tier and up to x1000 coin wins at the top. For the other levels, a minimum of three other prizes are selected for each game round, which are listed in a list. The stairs are progressed by winning combinations seen within one game round.

After reaching level six, advances to the free spin feature. The player is paid 6 free spins, during which the Megatrail meter has more extensive special features. Note that there is a feature on the lowest tier, which means that every winning combination knows at least one special feature.

Did BTG think that the Megaclusters games have not garnered the level of popularity that they would have hoped for? Whether they have or not, the basic game with its special features is definitely heading in the right direction.

Indeed, basic games are the weakness of almost every video slot these days. Here again, they don’t beat the free spins feature, which of course has its own special symbols and features, but as we’ve already said, the base game was the part that needed to be tweaked more.

Yes, there are! Free Spins are advanced through the meter aside the grid after reaching the 6th level.

The max. win of Millionaire Rush is impressive with 55,000 times the placed bet.

Yes, the slot offers an abundance of base game modifiers and features including wild addition, symbol upgrade and payout multipliers.

Yes, the slot is suitable for mobile devices although the interface will be a bit different than the one on a desktop device.