The Megaways Mob has a crime caper theme, set in London. A street scene forms the backdrop to the action here. You’ll see a pub, the Stagger Inn, and a police station. We are expecting this slot by Storm Gaming at the end of April 2022.

Visually, it has the look of an arcade machine, which I believe is particularly appealing to players. The soundtrack here is very atmospheric, as well.

You will have 117,649 Megaways available when fully expanded. There are 6 reels and an extra one above the main game board, helping achieve bigger winnings. Starting on reel 1, a winning combination occurs when 3, 4, 5 or 6 matching symbols or wilds land on adjacent reels, starting with reel 1. Megaways Mob’s RTP is 94.4%, which is much lower than the average of 96%. This slot has a medium to high variance, a max win of $250,000 per spin (just like other Storm Gaming slots).

You can adjust your stake by tapping the + and – buttons at the bottom left of the screen. This game of cops and robbers offers stake levels ranging from $0.20 to $100 per spin.

On the reels are A to 10 royals spinning alongside a thief’s tool kit, a sleazy reporter, a sign for the Whitechapel tube and a front page from a newspaper. It is the Megaways Mob logo that rewards you the most if you land six of them on adjacent reels.

The game includes a wild symbol that substitutes for all the standard symbols, a scatter symbol representing a bank, another for a safe, and a transformational mystery symbol. 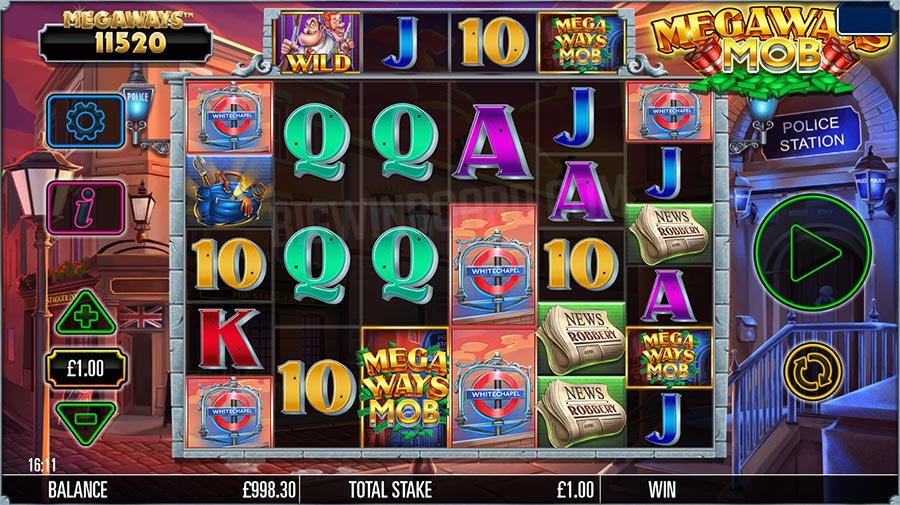 The reel above helps boost the winning combinations.

In this action-packed crime story you’ll find a variety of gameplay options, such as the Megaways feature, with reaction wins and variable wins. Look out as well for mystery symbols, pick me prizes and free spins with expanding multipliers.

The police badge symbol is the game’s Mystery Symbol, which transforms every time it lands on a spin into the same matching symbol. Following the transformation, a new payout consideration occurs with the transformed symbols.

You can trigger this feature by landing three Bank bonus symbols on the same spin. Choose one of the banks to reveal a cash prize.

In order to trigger the free spins, you need to land at least 3 safe Scatter symbols. The game starts with a 1x multiplier. Each time you get a reaction win during the free spins, that multiplier increases by 1. There’s no limit to the multiplier’s potential. It doesn’t reset following a cascade that doesn’t yield wins either.

As part of your free spins, the dynamites can award additional free spins. Additionally, you may benefit from a free spin in which the lower value A to 10 royal symbols are removed from the game grid, increasing your chances of landing a higher value winning combination.

Megaways Mob features many of the features we’ve come to expect from Megaways slots, including reaction wins, mystery symbols, and the features. While Megaways Mob doesn’t offer anything particularly original, the classy imagery and wide array of extras make it worth a try if you enjoy classic slots.

The RTP is the percentage of rewards that the player can expect in a game session. Normally, an RTP of below 96% is considered bad.

No, but there are other features to consider, including free spins, mystery symbols and pick me feature.