Roam through these dark and foggy swamps and discover the power of an ancient art form while receiving rewarding prizes in Madame Voodoo slot released in October 2022 by Wizard Games.

From the stunt mechanism to the mystery dolls throwing on the reels, many strange phenomena will occur in Madame Voodoo slot. Don’t underestimate the expanding powers of the voodoo dolls when they come in contact with the magic balls, and if you’re lucky, the Free Games can be activated with even more magic on the screen.

Madame Voodoo slot is played on a 5×5 reel grid where the number of winning paths can evolve from 3125 to 506250 thanks to the expansion mechanism. With a medium volatility, the RTP of the base game is around 96.07% and it can increase by activating the bonus buy-in option.

Based on a voodoo environment, the atmosphere of the game Madame Voodoo is eerie and connected with gruesome sound effects. The scene takes place in swamps covered by a thick fog, in the middle of a forest where ropes hang from the branches of trees. For players who can keep their cool, they will have the opportunity to win prizes by correctly aligning symbols on the reels.

To start playing, you’ll need to wager between $0.50 and $1.50 per spin. Winning combinations are achieved when 3, 4 or 5 or more identical symbols line up correctly from left to right on adjacent reels, starting with the leftmost reel. Three categories of symbols can pay on Madame Voodo, there are the weak symbols represented by colored stones, these symbols pay between 0.10x and 0.50x the bet. Bones, potions, candles or balls of wool can pay from 0.16x to 0.80x the bet and are the medium symbols. The best symbols are represented by the ram’s head, the skull and the voodoo wizard, which pay between 0.40x and 5x the bet.

You will also find a Wild and a Scatter. The Wild represented by the voodoo witch allows you to substitute all symbols except the Scatter. The cauldron is the Scatter and can trigger Free Games if you find 3 or more of them. 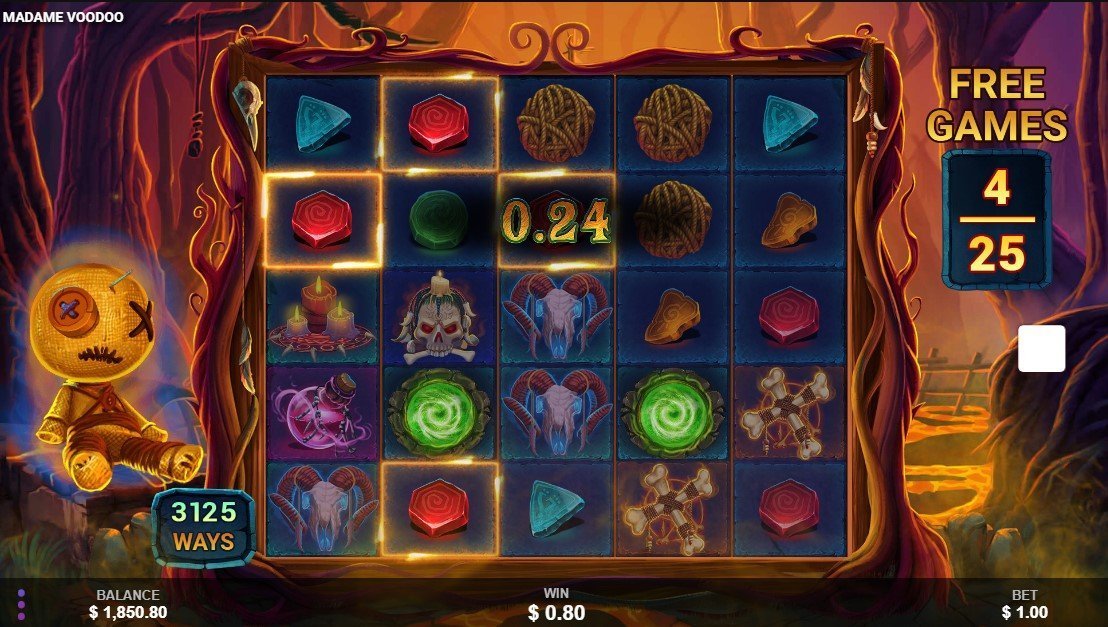 Tumbling Tiles are activated when a win occurs. All winning symbols pay and are removed from the grid to make new symbols appear. Tumbling Tiles can continue and reward multiple times.

The Voodoo Doll can randomly activate at the end of a round and after the combinations have been rewarded. It will throw a number of voodoo dolls onto the grid which will then be transformed into a random and identical symbol type.

When a Voodoo doll symbol falls on a magic ball, then all adjacent positions become Voodoo dolls. All of these symbols will then be transformed into a random symbol of the same type and can split up to 6 times in the same position thus increasing the number of active winning paths.

Madame Voodoo vs. 3 other slots from Wizard Games

When 3, 4 or 5 Scatter symbols appear anywhere on the reels, it will reward the player with 10, 15 or 25 free spins respectively. Also, when the Voodoo Roll feature activates during the Free Games and the newly transformed symbols do not form a winning combination, then they will transform back into Voodoo dolls. These will move up one row on each free spin until they form a winning combination or disappear from the grid.

Enter the world of voodoo

Voodoo, which has inspired many movies and video games today, originally came from West Africa and gradually spread to wherever African slaves were deported, and is now a real religion associated with occult practices and witchcraft. In Madame Voodoo slot machine, we will witness black magic rituals with the famous voodoo doll acting up during the game. In addition to the mysteries unleashed by the Voodoo doll, the game includes an expansion mechanism that can greatly increase the number of winning paths. Coupled with the cascading win mechanism, this can become really powerful and generate a lot of winnings during the game.

Yes, if you land at least 3 Scatters you will access the Free Spins mode.

Yes! For either 75x or 150x you can gain access to the Free Spins round instantly.

They can be triggered randomly and when so, a random number of dolls appear on the grid and will then turn into the same symbol.

Dragons of the North