A steamy adventure begins in Thunderkick’s Lava Lava slot released in March 2022. Enter the realm of the volcano goddess and be sure to brace yourself for scorching pyrotechnic effects on the reels.

Revealing multiple aspects of the goddess Pele, the Lava Lava slot is inspired by Hawaiian mythology by showcasing the divine powers of the fire goddess, this translates on the reels into various unexpected phenomena such as bonuses, avalanches, wild multipliers and Scatter explosions.

The interface of the Lava Lava casino game takes the form of a 5×3 reel grid with 15 paylines. Set around erupting volcanoes, this game shows us a tribe vibrating to the rhythm of powerful and mystical tribal music and the goddess ready to interact at any moment. These graphics once again show Thunderkick’s true talent for offering us something that is both unique and consistent with the gameplay announced.

PROs and CONs of Lava Lava

Explosive is what best characterizes the game’s very high volatility and its winning potential of up to 10,000x the bet. The RTP on the other hand is a reasonable 96.14%.

To start the game, you’ll have to start by betting from $0,10 to $100 per spin.
When you start to enter the realm of Pele and press the spin button, the reels will start to spin and the objective will be to line up 3 to 5 identical symbols correctly and from left to right.

Ways to win in Lava Lava

There is no shortage of special and smoking features to accompany the game on the Lava Lava slot.

Wilds that are part of a winning combination come with a multiplier based on the number of Wilds included in the winning line. For example, multipliers can have the following values: x2, x4, x8, x16 or x32. 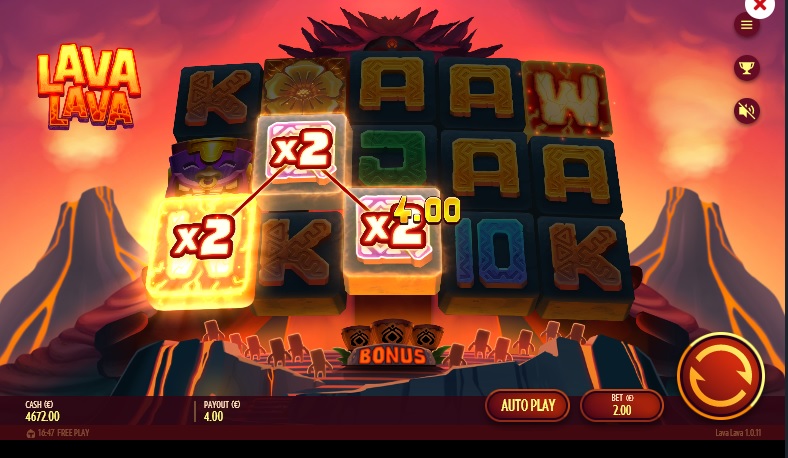 Wild symbols can bear a multiplier of up to 32x.

The Scatter Symbol is represented by the Goddess with the hair of lava. These symbols will explode and delete all other symbols vertically and horizontally except for special symbols. Scatters will be collected in the Bonus Meter.

Collecting 3 Scatters will trigger the Bonus or extend the existing bonus and get 10 or 5 free spins.

In the standard game mode, the Avalanche is activated only when a Scatter appears on the reels. But during Free Spins, this feature is always active. Symbols included in a winning combination are replaced by new symbols that fall instead. This continues as long as there are new wins.

At the start of each Free Spin, 1 to 3 Wilds are randomly projected onto the reels. Each Wild brings 3 lives that protect them from exploding during the avalanche phenomenon. For each spin where the symbol is part of a winning combination, a life will be consumed.

Thunderkick’s Lava Lava pays a beautiful tribute to the Hawaiian goddess and allows the player to feel the heat of an erupting volcano while extracting their winnings. Giving us a real boost on the reels, the goddess Pele as a Scatter can free up space on the grid to allow for new wins and bring us a little closer to Free Spins. It is by following this fiery path that we will get closer to massive 10,000x bet wins.

There are several significant features in Lava Lava. Some of these include Tumbling feature, Free Spins and Wilds with multipliers.

Yes, the game is designed to be played both on mobile and desktop devices.

Thanks to the high volatility, players should anticipate some dryness before hitting a big win.

Lost City of the Djinn

Riders of the Storm