Into the Storm Free Demo Play

The great times of vikings and warriors are making a comeback through SG Digital’s new slot called Into the Storm. The gameplay is set on a viking boat and you are probably going to be accompanied by big and scary men that will lead the way through the stormy sea.

Into the Storm - Slot Review

For any player looking for an ocean adventure we have the slot game you’ve been looking for, Into the Storm , an adventure online slot from software developer SG Digital. They were inspired to design this game derived from the legend of the strongest Viking warriors. You will be aboard a warship to hunt for rewards on the raging seas. How many prizes will it have? Let’s check out the review.

What’s in the grid?

Into the Storm is an online video slot that takes you on a 5 reel, 3 row, easy winning ship game with a total of 20 fixed paylines and a special bonus feature that will help you win prizes even easier. As for the payback rate calculated based on the reel spin simulation is 10 million times, it has an average maximum RTP of 96% and its payouts have a fairly high level of volatility. In this game, you can win up to 10,500 times your bet.

Into the Storm vs. 3 other slots by Scientific Games

The design of this game will meet everything you are looking for. It is a graphic design inspired by the legendary Viking warriors. In the background of the game you will be on a magnificent Viking warship. The grid is in the middle of the ship and can occasionally break through the sea. The background music makes the adventure even more fun. Overall, the design of this game is considered excellent.

Five of a kind wins pay between 4 and 20 x your stake when the premium symbols appear: a viking helmet, three viking characters, and a shield. In the low pay, an accumulative collection of five different runes symbols produces a win of 1 to 2 times the bet when five of them appear in a line.
Wilds can perform a variety of functions, but their primary function is to substitute all of the normal pay tiles and appear only during the base game or when a respins occurs.
Into the Storm has a fairly short betting range as the minimum bet is $0.20 and the maximum one is $20.

PROs & CONs of Into the Storm

What are the features?

While spinning the basic game reels, if 3, 4 and 5 bonus symbols appear on the reels, the Kraken bonus feature will start with 1, 2 or 3Kraken hot zones respectively. You will have a 9 reel game area and win 3 free spins. In the Kraken Bonus grid will appear only blanks, multipliers and special symbols with the following properties:

When you spin the Kraken bonus reels, all symbols appearing on the reels except the blanks, will reset your lives to the same 3 or 4 times and if you fill all the reels with a multiplier you get the reward of 10,000 times your bet. 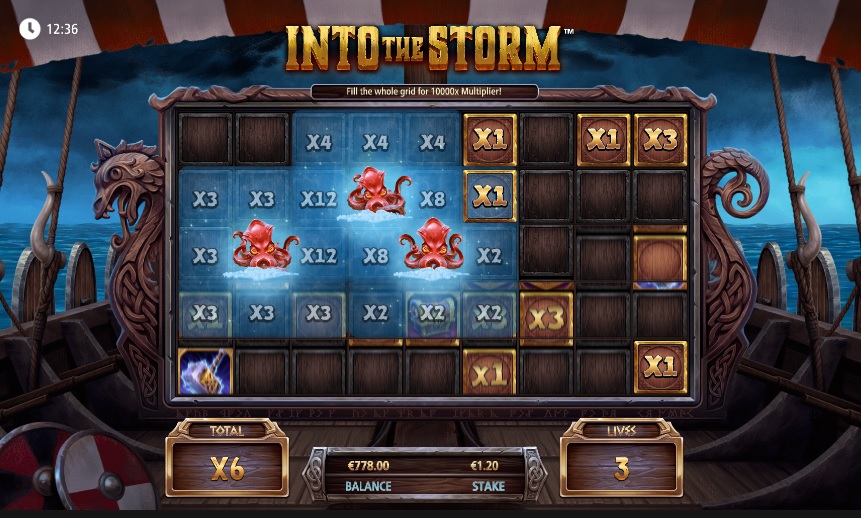 In the Free Spins round, 1 to 3 Kraken zones appear helping you achieve bigger wins.

We can guarantee that Into the Storm will be another popular online slot game for casino players. Because it comes with a beautiful design to play with and more importantly, it also has an excellent payout rate. So, if you are ready, pack your bags and hop on board the Viking ship for your 10,500 x bonus today.

This slot was created and will be launched by SG Digital.

Yes, the game designers took care of that. You can play on any device that you want.

This slot machine has a hold-and-win feature round with multiplier position hotspots around each Kraken symbol (1, 2 or 3 are granted from the scatters). There are three modifier symbols, and filling the grid equals a 10,000x payout.

Into the Storm comes with high volatility and a default RTP of 96%. Keep in mind that the RTP could vary among casinos.

Reel ‘Em In! A Bit Fishy