One thing about Moscow or Russia in general that everyone should have on their bucket list, without any hesitation would be the Red Square in Moscow and the St. Basil’s Cathedral. We understand that all the trip planning could be annoying and fortunately provider Playtech has come up with a solution: Grand Junction Moscow Magic.

Grand Junction Moscow Magic by Playtech is set to be released in April 2022. The slot has a classic 5 reels and 3 rows grid that features 50 betways present. As for the other technicals, the estimated RTP is 96.51% and the variance of the slot is medium, which is always a good thing.

Set in the background you will see one of the most famous churches in the world placed over the Red Square in the town of Moscow. The overall ambiance is a bit stiff as nothing much really happens but we are not there for the animations after all. 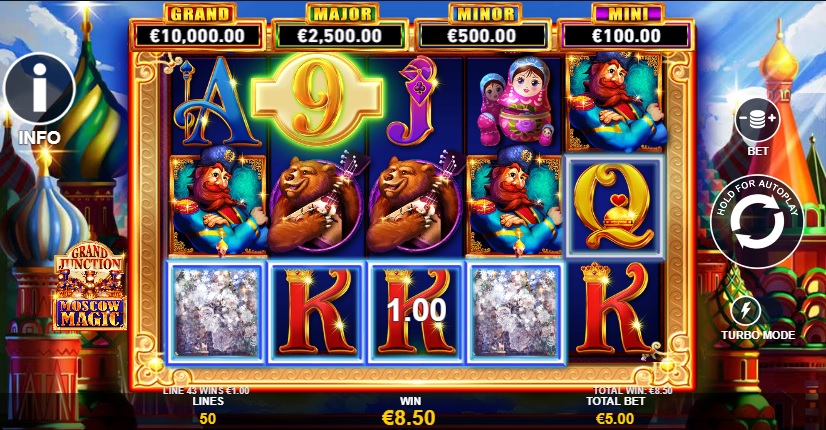 The Towers of St. Basil’s church are the Wild symbol of Grand Junction Moscow Magic.

The betting options start from $0.10 and go up to $500 and in order to form a winning combination you need to line a minimum of 3 identical symbols on a winning path.

As for the paying symbols in Grand Junction Moscow Magic, they go:

The first kind of free spins are triggered by 3 Faberge Egg symbols. Landing them will lead to an instant prize from 1x to 50x the stake and 11 Free Games.

In order to trigger the Grand Junction, you must land 5 Steam Train symbols.
There are two levels:

Overall, Playtech does not cheat on its previous pattern and keep up with the same ambiance of its slots. The features are the key thing in the slot and for what is worth it is great that there are 2 types of special features plus the expanding wilds. The maximum potential of the game is 2,000 times the bet delivered from the Grand Jackpot.

Yes, Grand Junction Moscow Magic is to be played both on desktop and portable devices.