Big Time Gaming is bringing back the fishing theme right before the summer season with Golden Catch slot. Golden Catch Megaways is a high variance video released on online and mobile casinos in May 2022.

Fish and fishing themes are not entirely alien to casino games, or even the megaways category, as we recall releases from the likes of Microgaming, Thunderkick, Yggdrasil Gaming or, most recently, Blueprint Gaming. As for the layout, we are not really surprised, as the reels are set at sea, with fishing boats and a harbor with lighthouses in the background.

Even if the Big Time Gaming theme does not set them apart, they have a chance to do so with other features. At a glance, it would seem that they are by no means complex, but those few features would seem interesting with their slot symbols and payout multipliers. You can read more details in the following paragraphs. 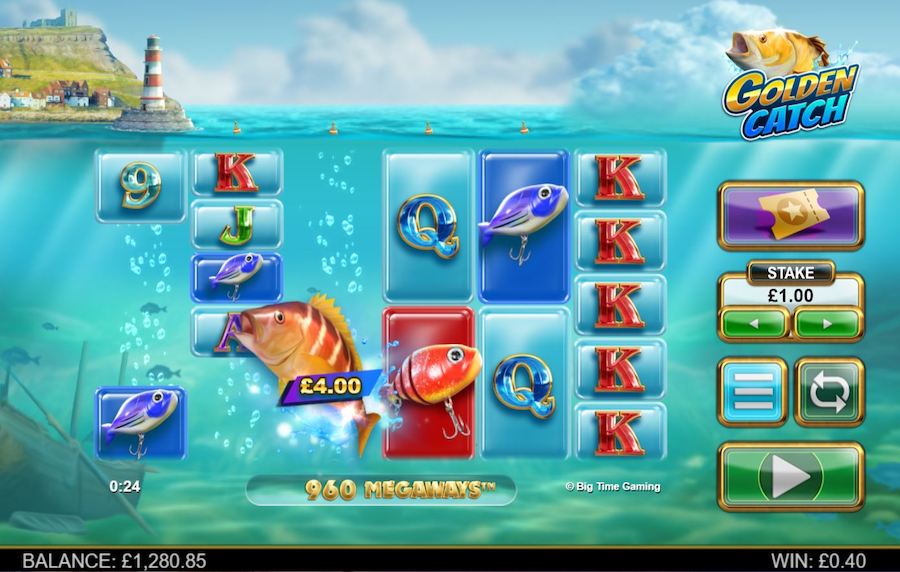 In the base game, a fish that appears could be caught by a fishing boat and reward a multiplier.

Golden Catch Megaways is a six reel wide, two to seven line high video slot with a line count per spin of 64-117,649. Two to six matching symbols and/or wilds are required for winning combinations, depending on the value of the winning pattern. The maximum win in Golden Catch Megaways is around 31 000 x bet. The payout percentage is a nice 96.53% – with or without a bonus buy-in.

For the paytable, we list the 9-A card patterns and the green, blue, red and purple floats. The line value of the main winning pattern is 50 x the bet for the six reels. The special patterns are anchored with wilds and scatter symbols with gold coins.
In this slot, you can place a bet between $0.20 and $16.

Golden Catch vs. 4 other Megaways slots

Actually, the special patterns are not limited to the aforementioned, as there are also coin symbols and fishing boats on the reels. The idea behind these is that winning combinations leave behind coin prizes (fish) that should be caught by ships passing over the reels. Each ship can catch the fish on the reels and multiply them by its own win multiplier, which ranges from x1 to x10 in the base game, with coin wins up to x500.

The bonus buyout price is x100. In the style of Big Time Gaming, even wins at or above x100 can be used to buy a free spins feature. If the win is x25-x100, the bonus wheel will show the odds of the free spins feature in red and green blocks.

We’ve written before about Big Time Gaming’s simple but effective line, which they stick to in Golden Catch Megaways with its slot symbols and payout multipliers.
If someone says that the basic game is boring despite what we just said, that’s equally true, although we feel it’s almost the opposite.

Although it is not very innovative, the theme of this slot is related to the sea/ fishing.

Thanks to the high volatility and decent RTP percentage, this slot often delivers smaller prizes and big winnings occur rather rarely.

During both the base game and the bonus round, winning lines vary between 64 and 117,649.