Everyone should rely on the power of nature! Fantasma Games is of course known for their original and innovative slots anyway, so we can usually appreciate them.
Now they come with Flower Fortunes Supreme as a successor to Flower Fortunes Megaways. We are very curious to see what they have in store for us this time.

What we immediately noticed after loading Flower Fortunes Supreme was that this slot also uses the Megaways mechanism. However, it is not mentioned anywhere that the game does so. Not in the title of the slot and not in the design either.

Speaking of the design of Flower Fortunes Supreme, we have to say something about that too. Because what exactly are we looking at? The playing field seems to be located in a ravine in a mountainous area.

All in all, Flower Fortunes Supreme has a distinct design. We believe that the design is drawn in a somewhat distinct and childish way. You could say that it has something creepy about it. In any case, there is a special atmosphere. 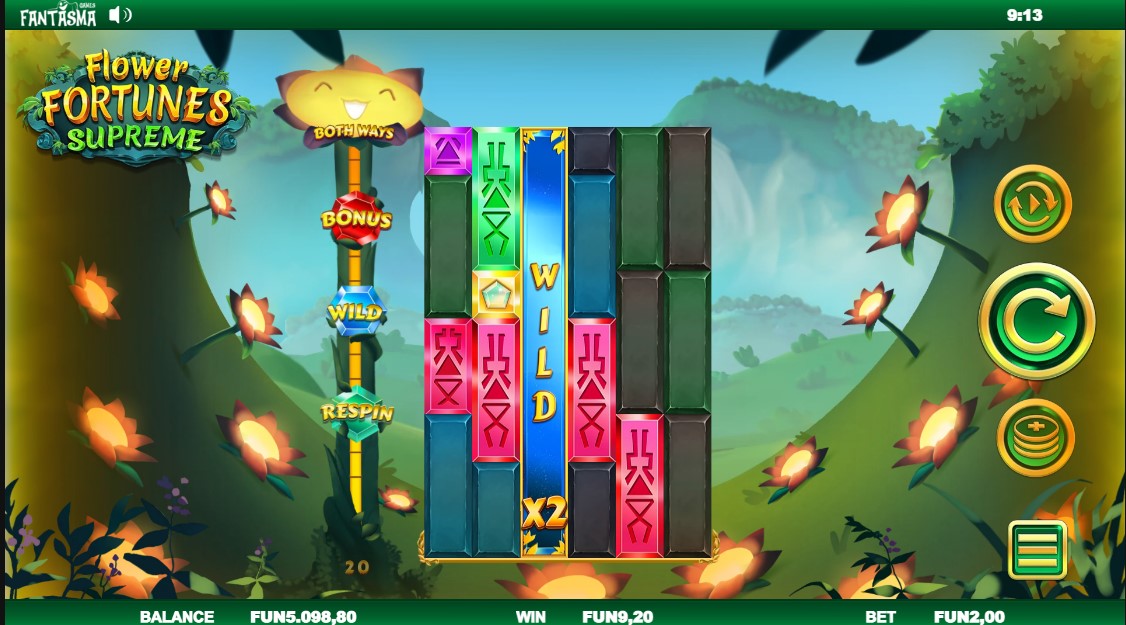 Basically, each spin in the base game starts with a playing field with dimensions of 6 by 5 symbols.

However, you can collect orbs in Flower Fortunes Supreme, which can expand each reel up to 9 symbols. The average payout percentage is set at 95.88%. However, this percentage varies from level to level. More on that later.

You can play Flower Fortunes Supreme in a casino online with a minimum bet of $0.20 and a maximum bet of $200. The variance is average and the maximum you can win is 5,000 times your stake.

Earlier we briefly mentioned the collectible meter, which is depicted on the stem of the flower that can be seen right next to the playfield.

Eventually you can reach different levels:

Once this feature is unlocked by reaching level 1, you can activate it by spinning a respins symbol on the playing field. The respins symbol then removes itself and 5 to 12 other random non-winning pay symbols from the playing field. New symbols then fall from the top to the bottom to fill the empty positions. Those new symbols, of course, can produce winning combinations.

Comparison between the 2 parts of the Flower Fortunes series

If you have unlocked this feature in level 2, then each landed wild expands to the total size of the reel. The landed wild symbol then also gets a multiplier of minimum x1 and maximum x9 attached to it.

To activate this feature, you need to spin at least 3 bonus symbols in the base game. This feature starts immediately after the active spin has ended.

Five flowers appear on the screen, after which you get a random number of opportunities to click on flowers. Each flower clicked on provides a cash prize of at least 0.25 times your bet and up to 100 times your bet.

This feature speaks for itself. Winning combinations can now be made not only from left to right, but also from right to left.

One thing we can really appreciate about Fantasma Games is that they always try to come up with something innovative. Innovative Flower Fortunes Supreme certainly is.

Unfortunately, this attempt at making a fun slot machine doesn’t come off very well. The design is just weird and the features don’t really grab us either. In itself, the idea of a collectible meter that unlocks features and symbols is nice, but not in this form. Give us a Reactoonz from Play N GO instead!

The base RTP of this slot is 95.88%. However, with every accessed level & new boosters the RTP increases in percentages.

Flower Fortunes was designed and created all by Fantasma Games.

Yes, you can. Keep in mind that the interface will slightly differ from the one played on a desktop device.