Euphoria Megaways is an online video slot from iSoftBet. It is the sequel to the popular online slot Euphoria. The game has a mysterious soundtrack and the symbols resemble Starburst, but combined with playing card symbols. Although CorrectCasinos tends to be quick to click mute, that is not the case with this slot. You imagine yourself in seventh heaven, or on the massage table at a wellness center.

Good. This slot is all about the numerous features. These include the Mystery Symbols, Star Symbols and the Euphoria Spin. In addition, the Megaways mechanism applies. So there is plenty to experience in these online slots.

You play Euphoria Megaways on a playing field with 6 reels. The number of rows varies per reel and per spin. The maximum win of this slot is 10,000 times your bet. The betting range starts as low as $0.20 per spin and the maximum bet per spin is $20.

Euphoria Megaways is a slot with high variance, the payout percentage is average at 96%. Is Euphoria Megaways yet another slot that wants to emulate the success of Starburst? Or are this slot’s features unique enough to knock Starburst off its throne? That and everything else you need to know about this slot machine can be read in this review.

Euphoria Megaways vs. 3 other similar slots

Looking at the bonus features, Euphoria Megaways has much more to offer than the original game. What exactly these features do for you read here.

The Wild Symbol is easily recognized by the colorful box that reads ‘WILD’. This is a joker, which means that the Wild symbol can replace any other symbol. This makes it easier to form a winning combination on the reels. The Wild Symbol only appears on reels 2, 3, 4 and 5.

The Star Symbol is the second Wild in this online slot machine. The Star Symbol can substitute for all other symbols except the Scatter. However, this symbol has a double effect. Namely, in addition, this is also a Multiplier. Do you land multiple Wild Multipliers? Then these are multiplied by each other up to a maximum of x729.

If you land at least 3 Euphoria Symbols on the reels, you trigger the Free Spins feature. How many Free Spins you receive depends on the number of symbols:

Each Star on the reels during the Free Spins feature activates a x2 Multiplier. If you land another Star on the same reel, this Multiplier increases to x3. At the top of the playfield, the number of Stars is tracked. The maximum Multiplier is x729. In addition, you can win 3 additional Free Spins if you land 6 Star Symbols. 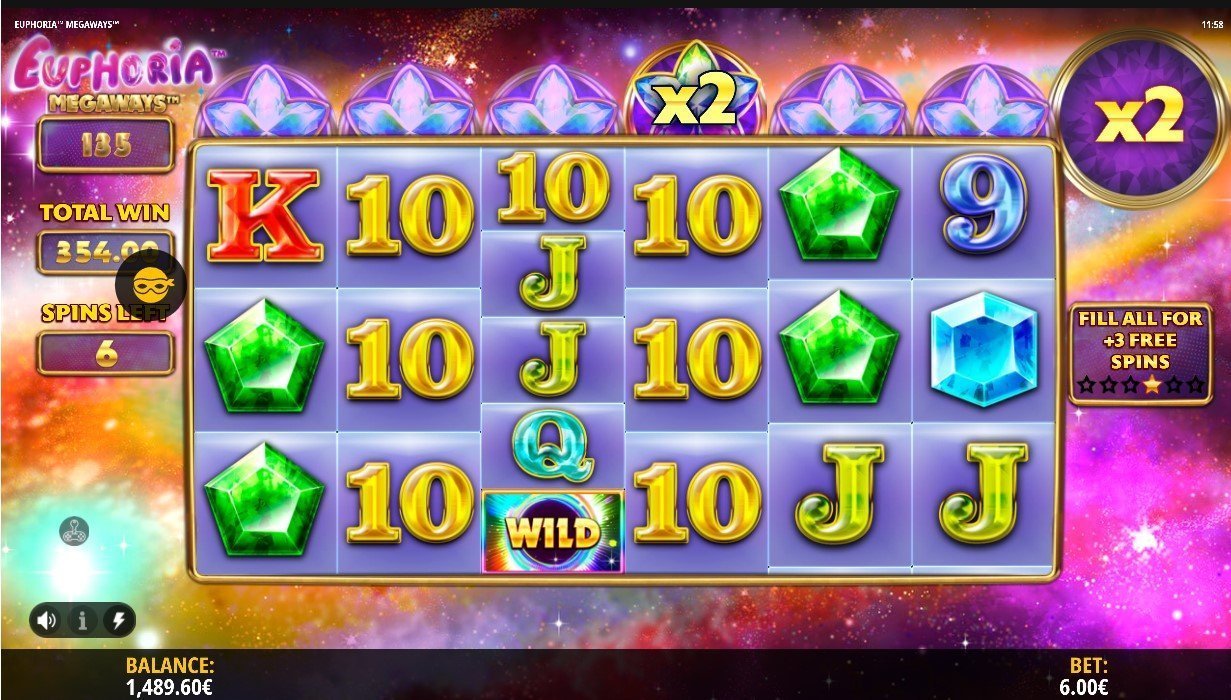 There is certainly no lack of features. This makes it an online slot with a lot of variety.

At any time during the base game, the Euphoria Spin can be triggered. You are guaranteed to land 2 Star Symbols during this spin. The Multiplier is increased during this spin and additionally multiplied by each other. As a result, this spin can provide a hefty win.

Like a Euphoria Spin, a MAX Megaways spin can also be triggered at any time. When this happens, the maximum playfield appears with 117,649 Megaways. This gives you a huge opportunity for lucrative winning combinations. If this occurs at the same time as a Euphoria Spin, at least 2 Star Symbols also land.

You can also trigger the features of the slot machine manually. You have the following possibilities:

The payout percentage of this slot is 96%

You win in this online slot by landing at least 3 identical symbols on consecutive reels. The first symbol of a combination must land on the leftmost reel.

The maximum win in this online slot is 10,000 times your bet.