As you probably saw from the title of Dragonfire Chamber of Gold, in this slot we are taking on one of the most powerful and powerful creatures in mythology: a dragon. So a good fighting outfit and a sharpened sword are vital.

After Wolf Canyon, this is yet another slot from iSoftbet that is dominated by a hold & win feature. Whether this slot is still challenging enough? We tested it out for you.

Dragonfire Chamber of Gold is played on a playing field with 5 reels, each consisting of 5 symbols. So each spin there are 25 symbols on the screen. The game has a total of 50 paylines and an average variance applies.

The casino online minimum bet is $0.25 and the maximum bet is $25 per spin. The payout percentage is set at 96.0% and you can win up to 16,656 times your stake. So in every respect the statistics of Dragonfire Chamber of Gold are pretty average.

You will notice that Dragonfire Chamber of Gold features unique characters. These include both heroes and villains, all of whom have a unique appearance. We do find it unfortunate that the playing field takes up so much space, as it doesn’t allow you to see much of the background.

What we can appreciate about Dragonfire Chamber of Gold, is that it has some thematic depth, the graphics are fine and the soundtrack contributes to the atmosphere that iSoftBet wants to create. The soundtrack even sends shivers through your body at times.

The features of Dragonfire Chamber of Gold are basically pretty straightforward. The highest prizes can be won in the respins feature, while splitting wilds define the picture during the base game.

If a winning combination is created during this respin, all the wilds involved will move to an adjacent reel. You then receive another respin.

Dragonfire Chamber of Gold vs. 3 of the newest iSoftBet slots

Wilds can also land with win multipliers. This multiplier then increases by +1 each time the wild moves to a new reel.

There are more ways to trigger a respin. You then need to spin a wild on reel 2 and reel 4 simultaneously. During this respin, reel 3 turns into a wild reel, which means that the entire reel consists of wild symbols. The ‘original’ wilds are moved to reel 1 and reel 5 during that respin.

During this respins feature ‘regular’ pay symbols are removed from the game. The goal is to spin more scatters. Each newly spun scatter brings the total number of respins back to 3. Also newly spun scatters remain fixed at their position.

Also notice that during the free spins feature 2 gates with bars can be seen next to the playing field. You can open a gate by spinning a new scatter 3 spins in a row.

Each scatter during the free spins feature lands with a certain cash value. If the right gate is opened, then all values of scatters on the playing field are collected and paid out to the player. These scatters are then removed from the playing field. 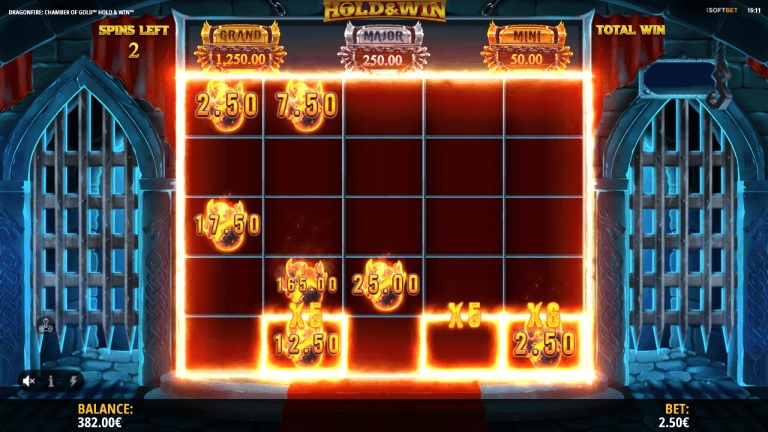 Defeat the dragon to gain access to the “chamber of gold”!

Let’s say up front that we always appreciate it when slot developers try something new. You can see that iSoftBet has put some effort into the production of Dragonfire Chamber of Gold. They came up with their own theme, tried to bring it to life with an appealing design and tried to create a unique gaming experience with innovative features. Unfortunately, it all just doesn’t come together. The theme remains superficial and the design is largely determined by the playing field. The splitting wilds don’t really catch on and the respins feature never really comes off.

Yes, there are. The slot comes with a Hold & Win bonus game and different modifiers.

The bonus starts with 3 re-spins and each time a new symbol lands, the meter is reset to 3. Your goal is to collect as many cash value symbols as possible as they are collected in a total at the end of the bonus.

Yes, the slot is already available in most iSoftBet casinos. Keep in mind that we do not recommend this slot for beginners.