Although it is going to be spring or early summer at the time of release, the theme is inspired by the Day of the Dead celebrated at the end of the year, especially in Mexico, with skeletons and instruments to match the theme.

If the theme does not fall into any new category, then unfortunately the same words apply to almost everything else, since these game manufacturers have used similar ideas in some of the megaways games of the previous year, among others. However, as this is not an obvious clone, we’ll go through the basics in the following paragraphs, as well as the special, bonus and free spins features.

Dia del Mariachi Megaways is a 6 reel, two to seven row video slot with a line count per spin of 324-117,649. Winning combinations require two or three to six matching symbols and/or wilds, depending on the value of the winning pattern. Winning combinations are also broken, with new patterns falling into the empty spaces. The maximum win on Dia del Mariachi Megaways is 12 000 x the bet. The payout percentage is 96.42%, better than usual for today’s line-up. 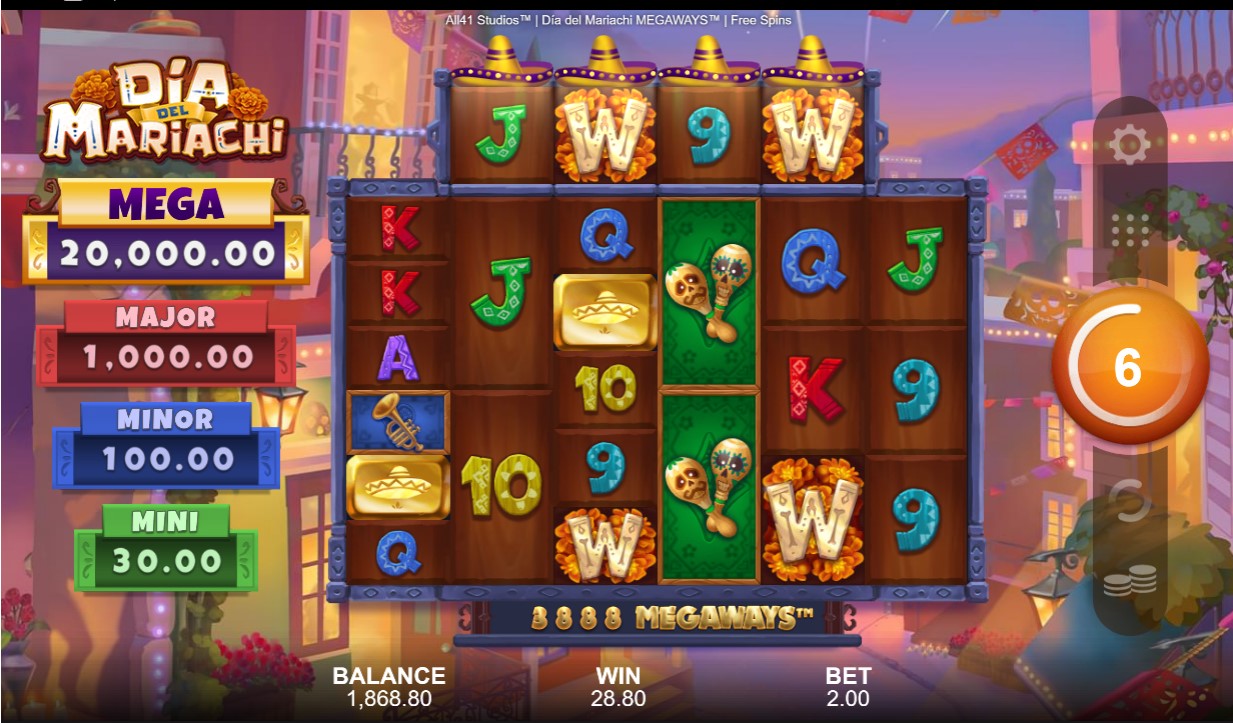 You can enjoy different modifiers throughout the bonus round.

For the paytable, we list card patterns 9-A as well as maracas, trumpets, violins and ukuleles. The line value of the main winning patterns is 50 x the stake for each of the six reels. Of the special patterns, the letters W are the top wilds and the gold sombreros are the scatter symbols.

Actually, the special patterns are not limited to the aforementioned ones, as the reels also have patterns that match the list characters. The special pattern feature is triggered whenever one is on the top row with an “illuminated” sombrero.

So, in all simplicity, the jackpot game is a whirl with blocks again containing the prizes listed in the list items.

The bonus buyout price – insofar as it’s only available – is x80.

We’ve already said that All41 Studios and Microgaming haven’t come up with anything new, but there’s something here.
Often the weakness of a basic game is that it’s boring, but with these special patterns it’s not terribly boring either. If you like them, you might also like the free spins feature with its similar special features.

This slot was produced by All41Studios in collaboration with Microgaming.

The Rolling Reels is the one that signifies the cascading symbols/ avalanche.

Thanks to the Jackpot feature, you can land up to 10,000x in a single spin.

This slot is based on the so-called Day of the Dead, a celebration in Mexico.

In this slot you can encounter Free Spins, special symbols leading to prizes, cascading symbols and a bonus purchase option.