Pragmatic Play’s Candy Stars slot was released in October 2022 and allows us to experience sweet flavors in a memorable disco atmosphere! A set of features such as Free Spins, multipliers, Sticky Wilds, cascading wins will also bring some extra treats in this glittering and colorful place.

We’ve seen candy-themed slots before, but the good thing is that Pragmatic Play has spared us the backdrop of cotton candy landscapes and ice cream cones this time around in favor of something more sober in order to focus exclusively on the reels, the latter of which can provide prizes of up to 5,000x the bet to the luckiest among us!

Candy Stars consists of 5×3 reels with an additional reel that runs horizontally, much like the Megaways feature does. The top row rotates independently and from left to right. This layout allows Candy Stars to unlock up to 576 ways to win. Volatility is rated 5 out of 5 with the game paying out less often but the chance of winning big prizes in a short period of time is higher which promotes high roller play behavior over longer sessions. In addition, the RTP is very decent with a value of 96.47%.

Candy Stars vs. 3 of the newest online slots by Pragmatic Play

The Candy Stars slot machine brings excitement with its many features: Tumble, Sticky Wilds, Free Spins and multipliers are to be expected during your game session. 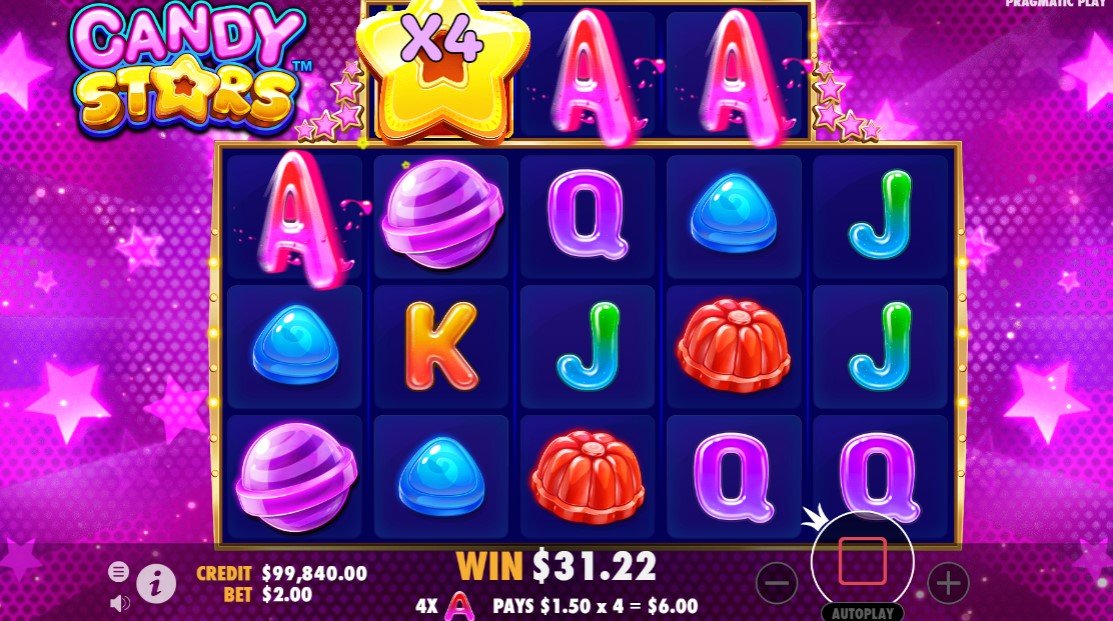 A progressive multiplier is available in every free spin.

When a Wild appears on the top row, it will stay in position and lock in place until the current spin’s cascades are completed. The Wild starts with a x1 multiplier and increases by x1 after each spin to a maximum of 128x. This Wild multiplier is applied to all winning combinations generated with it.

The Diamond Scatter symbol triggers the Free Spins. It appears on reels 1, 3 and 5, find 3 or more to start 8 free spins. During the free spins, a Wild will appear on the top row for each spin. The Wilds on the top row will remain in that same position until the current spin’s cascade feature ends. Unlike the standard mode, in the bonus, the Wild starts with a x2 multiplier that is applied to the relevant winnings and with each cascade the multiplier is doubled up to a maximum of 128x. You can receive 5 extra free spins by collecting 3 or more Scatters during the bonus.

Candy Stars brings intense games to players with its stunts and wilds feature that activate a progressive multiplier during the base game. Even more action is expected during the free spins bonus where the multiplier grows faster to its maximum value. The game can really take off during the free spins and that’s what we’ll remember about this candy-themed slot produced by Pragmatic Play. Now, overall, we don’t really have any strong opinions about Candy Stars, the game is neither good nor bad, it repeats attractive features already seen before and allows for simple play in an appealing setting. Try the game on mobile, computer or tablet with the free demo version!

You can try out the demo version directly on our website. If you mean to deposit real funds and try your luck with Candy Stars, you can check our list of trusted casinos and find one that suits your needs best.

The Sticky Wild symbol keeps its place for the duration of the cascades. It comes with a multiplier which increases with every cascade.

Each casino has its own welcome bonus system and special features. To get the best free spins offers, you can check out our list of casinos that offer the best free spin choices for Candy Stars as well as many other online slots!

Yes, (excluding UK players) if you want to access the bonus directly, you can purchase this option for only 80 times your current bet.