The game laid out on 5×3 reels has 10 paylines and naturally includes the same features we see in others of the same family, namely Wild and Scatter symbols but most importantly a Free Spins bonus that features a special symbol that is able to expand and pay out without worrying about alignment. There is also a bonus buy-in feature and incidentally multipliers to be obtained during the bonus that may be used to reach the maximum reward of 20168x the bet in one spin. 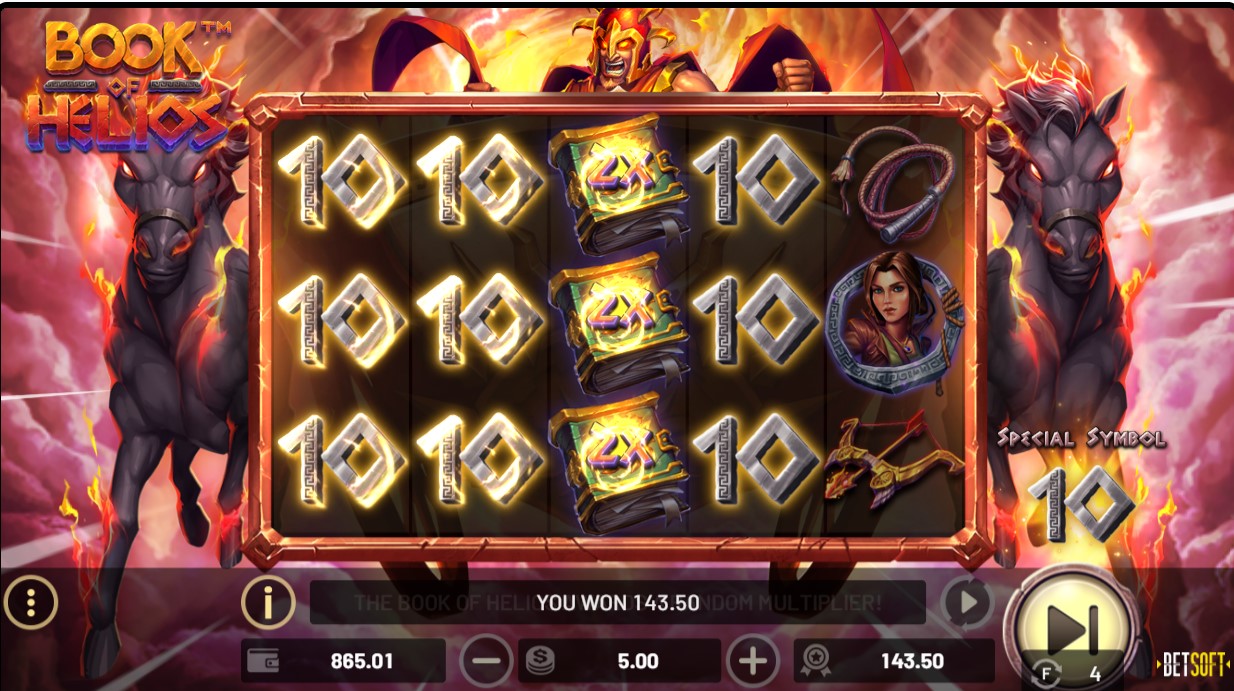 Win bet multipliers of up to 5x in the bonus round!

Specifically, the game is about ancient Greece and we see Helios on his fiery chariot with his stone horses on his way to epic victories. A heroine is added to the story, the designers took care to give her the name of Olivia Brave to add an immersive touch and perhaps compete with the famous Cat Wilde from Play N Go, you will be asked to fight alongside her by infiltrating the temple of the sun god.

Let’s start step by step, it may be interesting to know the technical features and how to win on Book of Helios. The RTP is 95.58% and you can bet from $0.10 to $10 per spin or $0.01 to $1 per payline. A win occurs when you line up 2, 3, 4 or 5 identical symbols from left to right on the screen. Strong symbols such as Helios and the Warrior and their attributes can pay from two symbols upwards. Helios pays between 2x and 20x the bet, Olivia pays between 1x and 15x the bet and the bow or lasso pays between 0.50x and 10x the bet. This is followed by the symbols A, K, Q, J and 10 which pay between 0.20x and 8x the bet.

Book of Helios vs. 3 other Book of… slots

When 3 Scatter symbols appear on the screen, you win 10 free spins. At the beginning of the bonus, a symbol is randomly selected to become special and spread over the reels when it can cause a win.

After all wins have been paid, if the special symbol is present on 2 or more reels and can form a win, it will expand vertically to cover the entire reel it occupies. The added benefit associated with the symbol is that it can pay out without necessarily being adjacent to each other on the reels.

Furthermore, if a Helios book appears during the bonus, it will also have the ability to expand vertically while revealing a win multiplier between x1 and x5. This wild multiplier can also multiply with others on the screen to form huge payouts.

You can choose to buy access to the free spins bonus for 65.5x the stake. This can allow you to discover the potential of the game in the demo version or try your luck to win big without waiting for the real version.

Adding some features like multipliers and extended wilds to the traditional “Book of” formula, Betsoft’s Book of Helios slot can pay out up to 20168x the bet, these prizes are mainly accessible when multipliers multiply with each other with strong symbol combinations. Come challenge the sun god by joining this adventurous lady!

Yes, you can! Players can get direct access to the Free Spins and for a relatively low price – only 65,5x.

Book of Helios features Free Spins operating with the Book of.. mechanism as we can see from the title. More than that, there are multipliers in the bonus round.

Yes, it is! You can access the game directly on this webpage without downloading and signing up.