Bon Bomb Luxpots Megaways is the new, super sweet and magical slot from developer Lucksome.
This slot takes us to a magical land where Willy Wonka would feel right at home. In theory, Bon Bomb Luxpots Megaways has everything we could want. There are green fields, blue sky and lots of sweetness.
Let’s soon see if the rest of the slot makes us just as happy!

The theme of Bon Bomb Luxpots Megaways is obvious by now: sweetness. The play area is on the side of an ice cream truck made of waffles and pink icing.

The truck appears to be on a grassy field, but at the bottom you can still see a piece of the cake with a green icing poured over it. The sky is blue with a few clouds in it. Further behind the ice cream truck are all the donuts, candy canes and other candies.

While playing Bon Bomb Luxpots Megaways, you can hear adventurous and magical background music, which could come right out of a Disney movie. 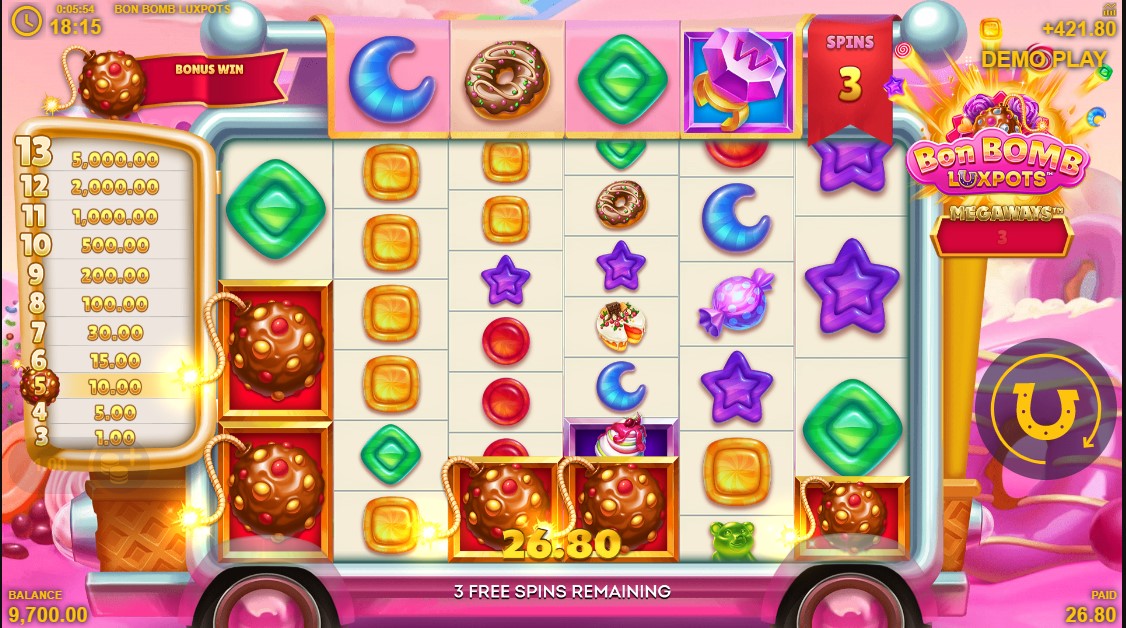 The playing field has 6 reels with 2 to 7 symbols per reel. As in other Megaways games, the size of the symbols varies each spin. This gives you a maximum of 117,649 ways to win in Bon Bomb Luxpots Megaways.

You can bet from $0.10 up to a maximum of $10 per spin, making the slot less suitable for the real highrollers. The variance has a score of 7/10 and is therefore average to high.

Finally, you can win up to 25,000 times your stake in Bon Bomb Luxpots Megaways.

During the base game of Bon Bomb Luxpots Megaways, you are helped by the Cascades feature and the Candy Bomb feature. In addition, there is a free spins round.

Every time a winning combination falls, the cascades feature comes into play. This Megaways classic removes all winning symbols from the playing field, after which all other symbols fall down to fill in the gaps.

In addition to the Candy Bomb scatter symbols, there are also Ice Cream symbols. These symbols are the free spins scatters and therefore allow you to play the bonus round.

In addition, these scatters can also carry a multiplier from x2 to x5. This multiplier is settled with the prize from the Candy Bomb Paytable.

Bon Bomb Luxpots Megaways is a magical world where everything is sweet, sweet and happy. Even the game play is sweet and lovely, even though there can be quite exciting moments.

The whole slot just works like a train, or should we say an ice cream truck. Of course, you have to love this sweet and colorful theme to like this slot, but that goes for almost any theme.

This slot is created in co-production of Blueprint Gaming and Lucksome.

The base game of this slot features cascading wins and free spins with cash prizes.

During the bonus round you need to collect the Candy Bombs in order to win cash prizes. The more Candy Bombs you win in consecutive spins – the bigger prize you get.

Deal or No Deal Megaways