Aztec Wilds Megaways is a slot game developed by Iron Dog Studio. This game features a 5 reel expandable configuration, which at times work in cascade mode. The theme is the Aztec civilization. The symbols present are: cards (from J to A), a snake, an eagle, a tribal warrior, a human skull, three different Wilds (the first one has the word “Wild” on it, the second one “Sticky Wild” and the third one is the “Aztec Wilds” symbol). Bets range from $0.1 to $50. The RTP of Aztec Wilds Megaways is 95.82% and its maximum probable payout is 12,000x the bet. As features, the game offers rewarding, sticky and stacked Wilds, free spins and bonus purchase.

Discover or rediscover the Aztec civilization

Aztec Wilds Megaways is a machine from Iron Dog Studio. This game features a 5-reel expandable layout (positions can feature 2 to 7 rows), and a number of paylines ranging from 64 to 117,649. As the title says, the game is based on the Aztec civilization theme and is an enhanced version of the base game, Aztec Wilds slot. The reels are a stone construction that extends onto a wall. Indeed, these reels seem to have blocked off access to a courtyard, as the universe looks like the main facade or entrance to a large courtyard.

Aztec Wilds Megaways vs. 3 other slots by Iron Dog Studios

There are masks on the stones of the coils or the supporting wall. The upper part of the reels has an emblem composed of several levels. Its role is decisive for the activation of the free spins bonus. Just after the wall or inside the said courtyard, the player can see some trees and a building that is difficult to identify due to poor visibility.

The symbols present on the reels are cards (from J to A), these pay between 0.6 and 1.5x the bet. They are followed by three animals of different colors (yellow, green and blue). In addition, there are three symbols: a snake, an eagle and a tribal warrior. These are the best paying symbols. There are also human skulls. With six items in a payline, the player wins between 2 to 10x the bet. 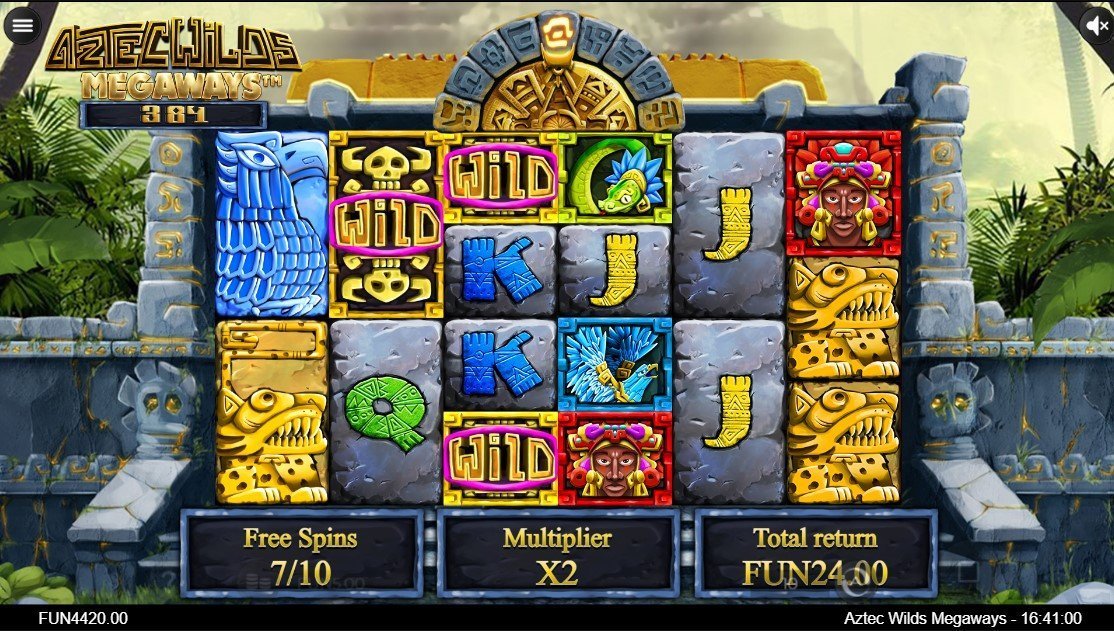 The special symbols are numerous. In fact, there are three versions of the Wild: the first is a Wild logo. This is the normal Wild. The second type is the sticky Wild on which the player can read the words “Sticky Wild”. Lastly, there is the Aztec Wilds symbol. The game has no scatter.

To get a spin on this slot from Iron Dog Studio, you need to spend between $0.10 and $50. The RTP is 95.82%, the maximum probable win is 12,000x your bet. The features present revolve around the wild, free spins. The player can also engage in the purchase of free spins.

The game operates on the stunt system, which means that after each win, the slot machine will replace the symbols that contributed to the win. To facilitate these wins, the game provides the player with three versions of Wilds.

The regular Wild replaces each regular symbol to contribute to a win. This symbol will remain on the reels for one spin in Tumble mode after it has been used. This symbol can also be presented in a stacked form. The consequence of this presentation is that the player can see how this symbol could multiply its appearances on other reels.

Despite the existence of the Scatter, the game offers free spins. To access this feature, one must get 4 successive wins when the stunt system is triggered.

If this happens, the player will get 14 free spins. There is also the possibility to get an extra spin and an advantageous win multiplier for each additional stunt.

Based on a quick calculation, the player can expect to get 20 free spins with a multiplier that would be worth up to 6x the bet at the eighth stunt level. Finally, the player can buy 8 or 10 free spins on this slot. To do so, he has to spend $85 for the first offer and $115 for the second.

Yes! The slot features base game modifiers as well as a Free Spins bonus round.

Luckiest player has the chance to win the biggest prize of 12,000 times the bet.

Each casino has its own welcome bonus system and special features. To get the best free spins offers, you can check out our list of casinos that offer the best free spin choices for Aztec Wilds Megaways as well as many other online slots!