Translating a powerful mix of history and mythology, the Athens Megaways slot developed by Red Tiger and released in November 2022 invites us to return to Ancient Greece.

Immerse yourself in the Greek city where venerable hoplites wait patiently for your arrival to oppose the gods on the grid powered by the BTG licensed Megaways mechanism. With the addition of three modifying Wilds, Hades will send his wretched souls, Poseidon will flood the grid and Zeus will strike with lightning to ease your way to great victories. In order to reach a level worthy of Mount Olympus, a free spins bonus may also highlight one of the deities associated with a progressive multiplier.

The Athens Megaways slot is played on a grid of 6 reels with variable rows of between 2 and 7 symbols. This Megaways layout has proven itself time and time again with up to 117649 winning paths to activate. Highly volatile, this casino game offers an RTP of 95.68% and a winning potential of up to 19992.7x the bet.

While playing Athens Megaways, whether you are on mobile or computer, the environment might seduce you with the elegant and dramatic graphics and melodies, the scene is set in the majestic Greek city located on a hillside, you can see harbor houses, but also characteristic columned temples. The remains of this civilization remain anchored mainly inside the grid as symbols. Without dwelling too much on the visuals, let’s see how to generate the first winnings if this slot machine.

Joining the Hoplite army requires a bet, ranging from $0.20 to $4 per spin. You will then have to line up 3 to 6 identical symbols from left to right on the screen, starting with the leftmost reel, to win a prize. The helmet, shield, foghorn, vase and lyre pay between 0.30x and 3x the amount bet. The alphabet Delta, Theta, Sigma, Psi and Omega will settle for paying between 0.10x and 0.80x the bet. Despite these relatively small payouts, the winnings will be enhanced by the chain reaction mechanism activated with each win. Winning symbols disappear, leaving room for new symbols that can in turn form new wins.

Apart from the stunts feature, Athens Megaways slot includes three randomly triggered modifiers on any spin: Soul Lit, Sea Fury and Olympus Blessing featuring the three deities Hades, Poseidon and Zeus. These modifiers come in the form of different Wilds that can replace any symbol in the game.

Athens Megaways vs. 3 other Megaways slots from Red Tiger

The soul of the dead can escape from the realm of Hades. Between 2 and 9 Wilds symbols can appear on the four middle reels.

Randomly at any spin, the god Zeus can apply a random multiplier to a win in the current spin. The initial value of the multiplier is between x2 and x5 and it increases by +1 for each cascade generated. The multiplier is removed after the spin and can increase to a maximum of 20x. 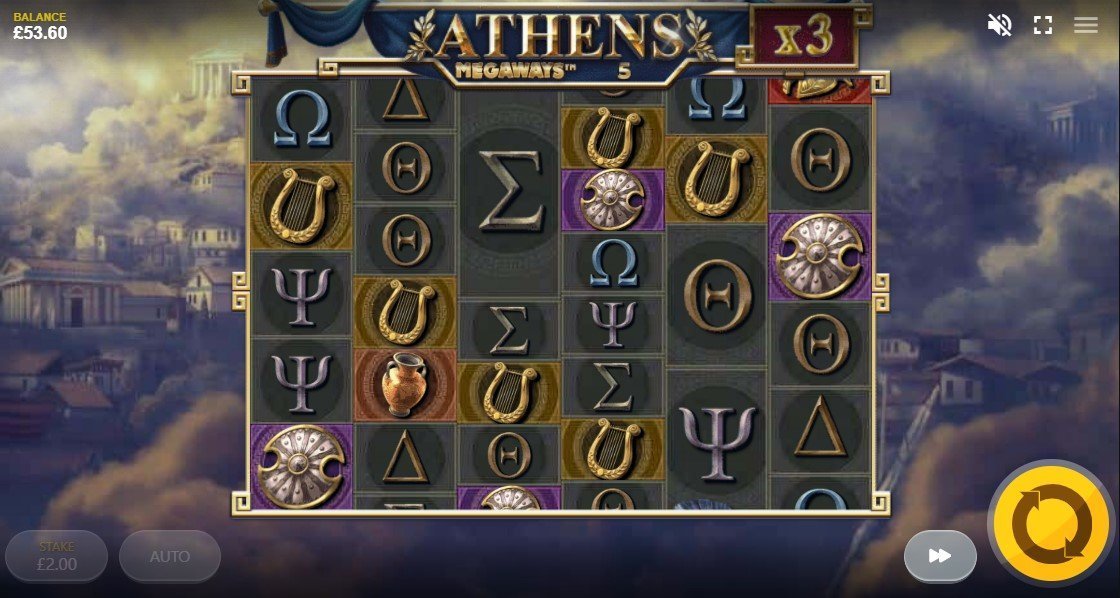 On random spin, a multiplier may land on the grid.

Find 3 Scatter symbols represented by the Greek temple to access the Free Spins. You will win 8 free spins.

Before the bonus starts, 3 identical temples must be selected to determine one of the three modifiers active during the bonus. The modifiers will occur at a higher frequency during the free spins.

In addition, you will start the bonus with a x1 multiplier that will increase by =1 with each win to a maximum value of x20. The multiplier will not reset between spins. If the Olympus Blessing modifier is active, multipliers received from the feature will be added to the overall multiplier but the maximum will not exceed 20x.

Bringing back the golden age and grandeur of ancient Greece

While Hades, Poseidon and Zeus apply their divine powers to the reels, you’ll win huge prizes in Red Tiger’s Athens Megaways. During the free spins, one of the modifiers dominates and it will work in conjunction with an increasing multiplier to form bigger and bigger wins. The cap on the progressive win multiplier doesn’t stop good rewards from being achieved, as evidenced by the maximum prize of 19992.7x the stake that can be won at any given moment.

Of course it is! Try your luck at Athens Megaways slot machine in the safety of one of our recommended casinos. We suggest you take a look at our page dedicated to trusted casinos so that you can enjoy yourself with complete peace of mind.

No, this slot does not feature any jackpot prizes.

Yes, when at least 3 Scatters land in your field at the same time, this will earn you at least 8 Free Spins. Before the bonus starts a modifier will be chosen for the duration of the free spins round.

Yes, you can play this slot directly on our web page for free and without registration.