40 Super Hot is an online slot designed by the world famous developer Amusnet Interactive with its various games. This slot machine is designed for beginners in this field, but this does not prevent experienced players from having fun. It is an old classic game with a modern approach that will appeal to many fans thanks to its careful design.

Created with a simple but effective interface, the background is a sober setting with a typical wooden frame. The online game is equipped with 5 reels and 40 paylines established in an attractive graphic environment and a refined sound atmosphere. As soon as the reels are triggered, the player can hear entertaining music and even during the winning combinations a dynamic animation followed by some sound effects.

As symbols, there are different kinds of fruits and other icons with a traditional design, namely the number 7 in red, golden stars, cherries, lemons, plums, oranges and watermelons.

The slot machine is suitable for anyone who wants to have fun, so it allows you to customize the bets. It is possible to bet with an amount that varies between 40 and 800 credits per game, although the number of active winning lines is fixed. Remember that the higher the bet, the bigger the payout.

The number 7 in red always plays the role of a wild card that can substitute for all other symbols except the Scatter symbol. The player collects a prize of up to 400,000 credits if they manage to collect 5 of them. 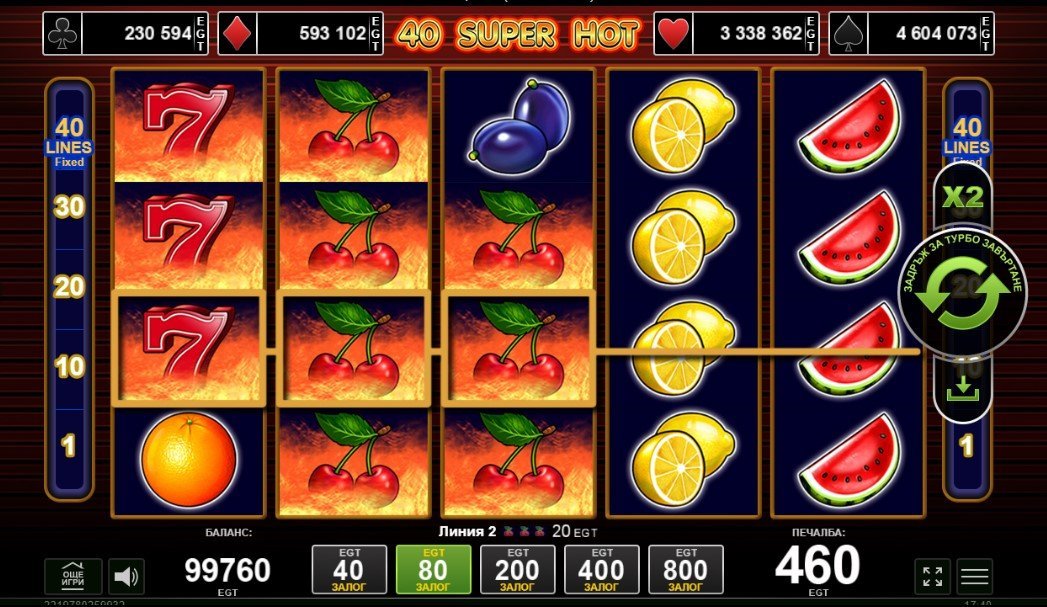 The 40 Super Hot slot has a Gamble feature. The player can access this feature as soon as he manages to display a paying combination on any of the 40 active paylines. In addition, if the player wants to double his previous credits, he can use the “double or nothing” feature. To do this, the player simply has to guess the color of the hidden card.

To end all spins, the player can randomly access a free spin game during which he has a high chance of winning one of the 4 progressive jackpots available. This online game is simply relaxing in a classic yet modern adventure.

Wins are fairly frequent, but the real big reward comes when you win with multiple paylines at once. In such a case, even though one payline may not be that rewarding, you will still get a relatively large payout because it would combine all the paylines you have won.

The game does not have the free spins feature included in the gameplay. However, some casinos may offer an option such as a welcome offer or other bonuses. You can search for casinos with free spins offers in our list of verified casinos offering the 40 Super Hot slot.

This is a popular slot machine available at many online casinos. You can try the game in demo mode on our website. If you want to play for real money, check out some of the websites of our list of the best options for playing 40 Super Hot.

Amusnet Interactive has created many games based on a similar theme and mechanics. The 20 Super Hot, which is 40 Super Hot with 20 paylines, is probably the best known. However, there are also other options, such as Flaming Hot, Burning Hot or Dazzling Hot.